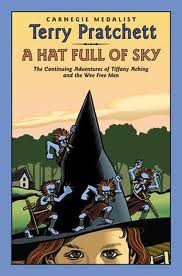 This is Book Two in the Tiffany Aching series, a young adult series that’s part of the larger Discworld series.

In the series, the world is actually a disc that rides on the backs of four elephants standing on the back of a turtle.  The series currently has 39 books, but there are sub-series within the series and  they don’t need to be read chronologically.  Pratchett’s website describes the series a little like Star Trek – you can enjoy the episodes without starting from the first show, and if you’re not sure who the pointy eared guy is, you’ll figure it out as you go.

Pratchett was probably, until JK Rowling came along, the UK’s most successful fantasy writer.  He’s received four honorary degrees and was actually knighted in 1998.  He was diagnosed with Alzheimer’s Disease in 2007, and since then has raised money for Alzheimer’s research.  He’s been outspoken about his condition as well as his support for assisted suicide.

Discworld has spawned annual conventions in the UK as well as the United States.  In fact, when I was in Wisconsin a few weeks ago, the Discworld convention was happening in Madison at the same time, so Pratchett was profiled in Madison’s paper.  In the interview he says that one of his first American tour stops was in Madison, Wisconsin, to an audience of about 26 people.  He also reports that he bought a cheesehead.

Forgive the aside – I’m new to Terry Pratchett’s works, but I think he’s interesting and wanted to give you a little background.  I’m sure that with all the annual conventions, costumes, games, and movies, there ARE lots of Discworld experts out there, but I can’t claim to be one of them.

I read the first book in the series, The Wee Free Men, last year, and it’s high on my list of good fantasy YA fiction, up there with Garth Nix, Rowling, and a few others.  The difference is that Pratchett is FUNNY.  He writes a great fantasy story, but also manages to turn the fantasy genre on its head.  As a satirist, he honors the genre and makes fun of it at the same time.

But I really read Wee Free Men for its title characters, the Nac Mac Feegle: a gang of six-inch tall blue Scottish pictsies who wear kilts and love to fight, swear, throw things, and drink.  They also look after Tiffany Aching, an eleven year old witch-in-training. It helps if you enjoy Scottish dialect, so you can understand dialogue like:

“Oh, we saw some muckle eldritch places when we wuz raiding for the Quin,” said Rob Anybody.  “But we gave that up, for she wuz a schemin’, greedy, ill-fared carlin, that she was!” “Aye, and it wuz no’ because she threw us oout o’ Fairyland for being completely pished at two in the afternoon, whatever any scunner might mpf mpf…” said Daft Wullie.

In Hat Full of Sky, Tiffany is sent as an apprentice to Miss Level, a witch in a nearby town.  Miss Level is a strange creature – she has two identical bodies but one mind, and can send one body out on errands while the other stays home.  She teaches Tiffany that witchcraft isn’t about spells and power but about caring for people. Most of the time that just means feeding them, cleaning up after them, and listening to them.  Tiffany doesn’t understand how that can be witchcraft.

Tiffany meets a group of other girls, all apprenticed to other witches in the area, and has to deal with the rivalry and insecurity that is typical of most pre-teen girls (witches or not).

I said in my review of Wee Free Men that despite the humor, these are surprisingly scary books.  Wee Free dealt with dreams you could get trapped in and never come out.  In Hat Full of Sky, Tiffany is stalked by a hiver just as she’s struggling to learn witchcraft.  What’s a hiver?  Some sort of disembodied spirit who doesn’t think and can’t be killed, but seeks to inhabit people with strong magical powers, like a parasite.  Once inside your head, the hiver imprisons your thoughts, takes away your free will and turns you into a monster.

So it’s scary, but still funny.  And I mean laugh-out-loud-on-the-bus-so-people-stare-at-you funny.  My favorite parts are when the Nac Mac Feegle set out to rescue Tiffany.  They don’t want to be seen by humans, so they all stuff themselves into a human-sized outfit (like a scarecrow) and try to pass themselves off as a human.  They think they’re fooling everyone – and fortunately the gold coins they hand out go a long way towards “erasing” people’s memories of a strange, wobbly blue creature where the head argues with the knees and the hands manage to go walking around by themselves.

Pratchett’s writing isn’t just funny, it’s clever.  He makes the kinds of observations you’ve thought but never put into words, like this one.  Miss Level is telling Tiffany about her experience working in a circus (having two bodies makes her an excellent circus performer).

“Have you ever been to a circus?”

Once, Tiffany admitted.  It hadn’t been much fun.  Things that try too hard to be funny often aren’t.  There had been a moth-eaten lion with practically no teeth, a tightrope walker who was never more than a few feet off the ground, and a knife thrower who threw a lot of knives at an elderly woman in pink tights on a big spinning wooden disc and completely failed to hit her every time.  The only real amusement was afterward, when a cart ran over the clown.

Tiffany is much more developed as a character in this book.  She really struggles with her role as a witch, what it means to take care of people (and when should people take care of themselves), homesickness, and being accepted by other girls.  Her life in Wee Free Men was sheltered and solitary.  Here she deals with jealousy, ambition, and embarrassment, even while fighting to save her body and mind.

Silence spread out around Tiffany, a living silence, while the sheep danced with their lambs and the world turned.

Why do you go away?  So that you can come back.  So that you can see the place you came from with new eyes and extra colors.  And the people there see you differently, too.  Coming back to where you started is not the same as never leaving.

An all-around great book and definitely not just for kids.

← It’s Monday, What are You Reading?
Review: The Kitchen House by Kathleen Grissom →

1 comment for “Review: A Hat Full of Sky by Terry Pratchett”