“It’s Monday! What are you reading?” is a weekly event hosted by Sheila at Bookjourney to share with others what you’ve read the past week and planning to read next. 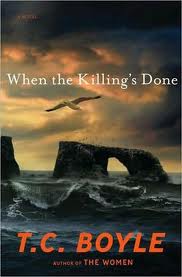 Last week I started When The Killing’s Done, by T.C. Boyle.  Boyle is a writer I really enjoy – some of my favorites have been The Road to Wellville, Drop City and Riven Rock.  Boyle writes about historical figures and events, usually in the last century or two.  He covers a wide range of topics, including real-life people such as Alfred Kinsey and Frank Lloyd Wright.  Everything he writes about is carefully researched so you really learn about the people, setting, and ideas of the times.

When the Killing’s Done is about a modern-day clash between environmental scientists and animal rights activists, set in the Channel Islands which are just west of the California Coast (from around Santa Barbara to Long Beach).  So far, I can tell you that while some characters are more sympathetic than others, Boyle shows there are no clear lines in the debate.  He’s also got me thinking more generally about how many ways there are to be “environmental”, and just as many ways to be hypocritical about it.   Who’s the better person:  the person who cares about animals but doesn’t mind committing vandalism or harassment, or even violence – or the scientist who chooses to eradicate one species to save a group of other species?

I finished Fuzzy Nation by John Scalzi, which was a quick and entertaining read.  Review coming soon.

As you can see from my recent post, I’ve also been reading about taking the GRE.  I signed up to take the test October 15, so now I have some time and don’t have to push (and can enjoy my travels in September).

I’ve also been reading a lot lately about writing.  In a way it seems silly to read about writing – does anyone really become a writer by reading books about writing?  Still, I recently picked up a used copy of Becoming a Writer by Dorothea Brande, which has rave reviews on Amazon, and is described as “the classic bestseller” on writing.

Another used purchase was a young adult book called The True Meaning of Smekday.  This is the first book written by a guy (Adam Rex) who went to school with my sister.  His books are fairly successful, with positive reviews, and I even saw this book on the “recommended for YA” shelf at my library.  If I like it maybe I can interview him for the blog.

That’s all for today.  What are you reading?

← Print Books: Which Ones Would You Move?
Doctor Who Season 1 and the Casting Change →

7 comments for “It’s Monday, What are You Reading?”