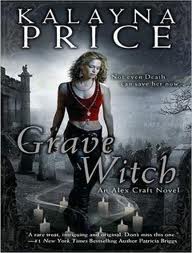 As you can probably tell, I put a lot of thought into choosing what I read.   There are hundreds of books I’d like to read, and I only have time for a few.  So this week I did something I wouldn’t normally do.  I let my Kindle tell me what to read.

Last weekend I was on Amazon purchasing a few books — Room by Emma Donoghue, The Marriage Plot by Jeffrey Eugenides, and Norwegian Wood by Haruki Murakami.  Good, literary stuff (not that I’m being defensive or anything).

While I’m on my Kindle, a slip of the finger leads me to this cheesy chick-urban-fantasy book, the kind Amazon loves to recommend for me.  I’ve mostly given up on urban fantasy.   I haven’t really liked anything unless it’s written by Patricia Briggs or Ilona Andrews.  I’ve tried, really, to find other UF writers I like (Janiene Frost, Kim Harrison, Charlaine Harris, to name a few).  It’s all too romance-novelly for me, too girly.  I really don’t want to read about hair & makeup, thigh-high leather boots and men with rock-hard abs.  My favorite heroine is Mercy Thompson, and when she talks about clothes it’s because she has to grab something out of her hamper (or off the floor) because nothing’s clean.  Now that’s a heroine I can relate to.

So Kindle took me to this uber-cheesy-looking book and I quickly hit the “back” button and went back to my purchases.  But somehow my Kindle purchased and downloaded this book I only looked at for a second.  I was about to call Amazon and felt sure they would refund my money and remove the offending book.  But then I thought, maybe this is my Kindle telling me something.  I checked out the reviews, and they were pretty good.  A comparison to Jim Butcher caught my eye.  So, in a callous disregard for $7.99 (and more importantly, my limited reading time) I decided to give it a try.

Generally speaking, I believe in rational decision-making.  I believe in data and ratings.  But, I also believe in something else — fate, luck, karma, whatever you want to call it.  Sometimes life is just telling us something.

You can see where this is going.  Against the odds, I picked up this book and REALLY enjoyed it.  As in, couldn’t put it down.  I even missed my bus stop last night.

Grave Witch, by Kalayna Price, is the first in a series about Alex Craft.  Alex is a witch whose powers include talking to the dead.  Alex uses her powers mostly to raise “shades” from the grave so they can talk to relatives or testify about who killed them.  She has a close circle of friends, a tiny dog named PC, a gargoyle in her front yard, a fae landlord, and lives on pennies (and a jar of pickles in the fridge) because her family has disowned her for being a witch.

There’s nothing terribly unique about this book, but it sucked me in right away and never felt cliche or stupid.  The genre of urban fantasy is horribly over-populated and under-written, but this book felt like an exception.   I recently gave up on Faith Hunter’s Mercy Blade because the writing felt ridiculous (something about a grown woman using the term “undies” just rubbed me the wrong way).  Grave Witch never felt that way.  Yes, there was a little too much “Fabio” in her description of the beefy love-interest, but thankfully it didn’t detract from the story.  Price’s writing and story reminded me of Patricia Briggs or Jim Butcher — Price is borrowing a little, but I can live with that.  The balance of magic, romance, violence, and story development was just right, and Alex was a tough but interesting character.

This was a tough work week, and Grave Witch was a perfect “light” read.  It’s not literary, and that’s okay.  It’s good urban fantasy, and I’m happy to have discovered Price.  She only has four books, two in this series and two in another series.  She’s probably someone you’ve never heard of, and thanks to my Kindle I can now recommend her.  Hopefully Book Two will be just as good.

← It’s Monday, What are You Reading?
Review: Small Island by Andrea Levy →

5 Comments on “Sometimes it’s just life telling you something…”