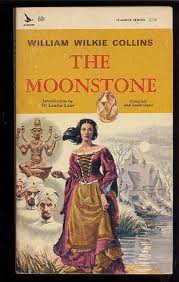 I’m still trying to decide if I liked The Moonstone better or The Woman in White… but it’s a silly question, really.  Both books are fun reads, if you can say that about Victorian novels the size of these two books.  You can see how they were real cliffhanger reads at the time, and why Collins was so successful.  They are full of mystery and adventure and – I think – are not meant to be taken too seriously.

Wikipedia says this about The Moonstone:

The Moonstone (1868) by Wilkie Collins is a 19th-century British epistolary novel, generally considered the first detective novel in the English language. The story was originally serialized in Charles Dickens’ magazine All the Year Round. The Moonstone and The Woman in White are considered Wilkie Collins’ best novels. Besides creating many of the ground rules of the detective novel, The Moonstone also reflected Collins’ enlightened social attitudes in his treatment of the Indians and the servants in the novel.

The moonstone is a gigantic yellow diamond that is originally set in the forehead of an Indian statue but is at some point embedded in the hilt of a sword.  The story begins when Colonel Herncastle, a soldier in India in 1799, sees the sword, commits murder to get it, and brings the Moonstone back to England.  Because the stone is of great religious significance to the Hindus, three priests are assigned to guard it – they will do anything to find the stone and return it to India.  Anything.

Nevertheless, the stone is given to Rachel and she wears it prominently at her birthday party.  Three mysterious Indians are seen outside the house.  That night, as she sleeps, the diamond is stolen.  The local police come in but find nothing.  The family then calls in the highly renowned detective, Sergeant Cuff.

The interesting thing about the novel is that it’s written as a series of recollections by the various characters (epistolary means written in letters, journal entries, etc., in case you were wondering).  The characters are asked, a year after the theft, to record everything they remember about what happened.  It’s organized so that the characters each write about the segment of time they were most involved in the events, so they aren’t writing about the same events from different points of view.

It starts out with Mr. Betteredge, the Verinder’s steward.  Betteredge is kind of a crusty old man, though good-hearted.  He lives his life by one principle, which is this: all of his guidance comes from his dog-eared copy of Robinson Crusoe.  Whenever he’s stressed or confused, he opens up the book and lets the text advise him.

Betteredge’s narrative gets a little tiresome at times, and he writes about everything in painstaking detail.  Of course it’s unlikely that anyone would remember so much a year later, but the clever thing about Collins’ setup is that the characters are told to record every detail they can possibly remember.  It’s not like a journal where you never believe people are going to write in as much detail as they do.

Interestingly, this book is sort of the father of the detective novel (although Poe contributed at roughly the same time but wrote short stories).  Collins may be the first to create the character of the “highly-renowned detective” although I wonder how many real-life Scotland Yard detectives were actually famous.  Still, it’s a staple of British mysteries that of course inspired Agatha Christie and Sir Arthur Conan Doyle.

As in The Woman in White, the characters really make the story.  Here, the characters are a little less extreme than in Woman in White.  There is no brave-but-ugly Marion, beautiful but simple-minded Laura, or dastardly Count Fosco.  However, in addition to the crusty steward, we do get one brilliantly satiric character, Drusilla Clack.  Clack is a young evangelist (a poor cousin to Rachel) who also narrates part of the story and drives everyone absolutely crazy with her tracts and religious advice.  Franklin, Rachel, Godfrey Ablewhite, Sergeant Cuff, Mr. Bruff and the mysterious Ezra Jennings all play interesting roles in the story.  I particularly appreciated that Mr. Bruff, the family lawyer, was one of the more reasonable and thoughtful characters in the bunch (these Victorian writers don’t seem to love lawyers).

While the book is considered to be fairly progressive for its time on issues of race and class (so says Wikipedia) I found the narration a bit dated when it came to views of women.  How much of the sexism in the book comes from the views of characters like Betteredge, who is older and knows nothing about women, and how much are Collins’ real views?  I struggled with this in Woman in White too.  There, he creates this amazingly strong female character, but he also takes pains to tell us how unattractive she is and she is never anyone’s romantic ideal.  In this book there are no very strong female characters.  Rosanna Spearman is haunting but not realistic.  Rachel and her mother are smart and strong women but always seen from a distance.

The book also raises some interesting views of medicine at that time.  There’s a story line about opium addiction which supposedly is based on Collins’ own experiences.

On the surface, this is a fairly plot-driven novel with a good mystery (and a few plot points I didn’t see coming).  I also liked that the author seems to be subtly rooting for the Moonstone to stay out of everyone’s hands.  At least I was rooting for that.  Are the three Indian men meant to be terrifying, or are they brilliant?  It all depends whether you want the Moonstone returned to its native country.

A side note: I discovered there’s a novel written about Dickens and Collins called Drood by Dan Simmons, and a pending movie by Guillermo del Toro.  Has anyone read it?  It sounds like a great read.

7 Responses to “Review of The Moonstone by Wilkie Collins”