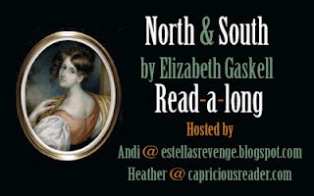 Well, I’m clearly no good at read-alongs, because I failed to post the last two weeks and honestly, I enjoyed the book so much I finished it well ahead of schedule.  So there you are.  Reading on a schedule doesn’t work for me.

That aside, this was a wonderful book, and I’m grateful to the read-along hosts for that nudge to pick it back up.

If I have a favorite time and place in literature, it’s Victorian England.  For one thing, it seems like a time that female authors really broke out and wrote successful, genre-changing literature.  Although since George Eliot wrote as a man, I can’t say the field was wide open for women writers at the time, but at least we can benefit from their work today.   Maybe I also just like the language of the time, and the way conventional society life just seems ready to break apart into something completely different.

North and South is similar in a lot of ways to the writing of Austen and Eliot, but different too (and how’s that for an insightful analysis?).  One thing you see in all three is the impact of financial worries on women at the time, women who are smart enough to run their households but who have little say in the decisions that impact them the most.  These three writers also like to contrast the intelligent woman (who you assume is really the writer) with the more frivolous, superficial women around them.  The men are criticized too, but not in the cutting way that the women are.  I wonder if Austen, Eliot and Gaskell felt themselves very set apart from other women in their time.

I posted a summary of North and South in this post, so I won’t repeat it here.  What really sets this book apart from its contemporaries is its unique subject matter, the exploration of conditions in northern industrial England compared to southern rural England.  Main character Margaret Hale begins the story with the idea that southern England (the sleepy town of Hellstone) is the place where all things are good, beautiful, and natural.  London is bustling and stylish but the big city isn’t for her.  Then she has to move to the industrial city of Milton.

Milton is dirty, loud and smoky.  It’s also a place where the classes walk side by side in the streets.   There’s a tension between the classes that doesn’t exist in Hellstone or London, because the factory workers know that the owners depend on them, which has given rise to the unions (or maybe vice versa).  Even with the unions, working conditions for the laborers are horrible.

Milton is an awakening for Margaret, who thought she knew what life was all about.  Her easy life in the country meant she could ignore the poverty around her.  In Milton she comes face to face with it.   Like many of Austen’s main characters, Margaret is “genteel poor” – meaning she’s of the upper class and can afford a house and a few servants.  She’s not suffering by any stretch but she’s looked down upon by the rest of her class, and one disaster could send her family off the edge.

Nothing is simple in Gaskell’s story.  Religion, labor, class, family, even things like duty and honesty – everything is multi-dimensional and seen from different viewpoints.  You could talk about this book for hours.

The side characters of Bessy, her father, and Mrs. Thornton bring this book to life, but Mr. Thornton was my favorite.  He’s proud, stubborn, smart, thoughtful, well-meaning but too rigid in his views.  For example, he will go out of his way to do something kind for a person he knows, but has no concern for the larger issues of the laborers until it impacts him economically.  Gaskell describes him as basically selfish but loyal.

Margaret, on the other hand, is a little more insightful about the big picture issues.  She knows nothing about labor or management but sees instinctively where Thornton is going wrong.  On the other hand, where Thornton is all about strength and direction, Margaret seems to float along and does whatever people ask her to do.  She’s no Elizabeth Bennett, and her inability to speak her mind or take action is extremely frustrating.   Not that she has it easy – Gaskell does everything she can in this story to tear Margaret to shreds.

I really enjoyed watching how Margaret and Thornton change throughout this book – it isn’t just that they come to understand each other, but they really grow as people.

For anyone who likes Austen, Eliot, or Dickens I would highly recommend this book.  Gaskell’s writing is a little more down to earth (although difficult to follow at times) and her characters are a lot more nuanced.  You get a love story here, and a good one – but you get a lot more than that.

← Counting down to vacation — what books should I bring?
Review of Bride of New France by Suzanne Desrochers →

7 comments for “North and South: the Read-a-long Wrap-up”

"The world was hers for the reading."