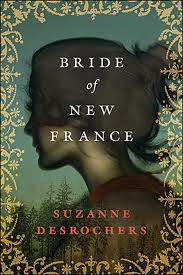 Note: The Book Stop is officially on vacation.  I wrote this ahead of time so I may not respond to your comments (but please comment).  Enjoy!

In general, I appreciate when a novel tries to really teach me something, because I find fiction is the best way for me to learn.  I just absorb history better when it’s tied to a story and characters.  On the other hand, telling a good story and developing good characters is what makes historical fiction work.  And on that point I had mixed feelings with this book.

Bride of New France is about the 17th century “founding” of New France, the French colony in Canada.  Laure Beausejour is taken from her destitute parents as a child in Paris.  She is basically institutionalized at the Salpetriere, a place where the French kept the poor.  She becomes skilled in the art of lacemaking, so the Salpetriere elevates her to the rank of Bijoux, and is forced to sew while she dreams of someday getting out and becoming an independent seamstress.

While Laure has big dreams, her grip on reality is not so good.  She speaks her mind a few times too many and finds herself on a ship to Canada (New France) as a fille du roi (“daughter of the king”).  This is  a title that sounds impressive but in actuality, she’s being sent with a group of other poor and unwanted girls to make babies for the men in the Canadian frontier.  She’s terrified of what she might find out there, and first has to survive a long and dangerous voyage.

I enjoyed reading about Paris and the history of these poor girls in the Salpetriere.  I also enjoyed this view of the Canadian frontier and how it was first colonized, and the treatment of the tribal populations.  I know very little about Canada although I suppose their colonization doesn’t differ greatly from the U.S., except it was a lot colder and more remote.

I also appreciated Desrochers’ writing style, which is brief but descriptive. She’s very good at creating atmosphere. She provides a lot of historical detail in a way that isn’t all facts and dates.

The child squirms a little, letting out a whimper as she turns her head to breathe.  She is too young to recognize the sour smell of her father’s woolen cloak as something unpleasant, disdainful to others.  She accepts the scratchy material against her cheek just as easily as she falls asleep when the hollowness of her stomach makes it difficult to stay awake.

At the same time, the writing throughout the book is really lacking in emotion.  Desrochers tends to describe what her characters do without talking much about what they think, which works in places but keeps you from really getting inside Laure’s head.  Laure makes decisions that are hard to understand without more explanation, like convincing her friend Madeleine to join her on the voyage.  It’s like she just operates on gut instinct — and her instincts are not particularly smart.

The real downside to this book for me is that Laure was a very difficult character to like – she’s horrible to the other girls and generally doesn’t like anyone.  I actually like unlikeable, anti-social heroines (think Eustacia Vye or Mary Lennox or Scarlett O’Hara) but Laure’s selfishness goes way beyond unlikeable. Her relationships with everyone are based on what they can do for her.  She makes thoughtless decisions that impact others without ever thinking of the consequences.  And while she goes through many ordeals in her life, you don’t really see her grow or change.

Desrochers is aware that Laure is unlikeable, and explains in her notes that a woman who wasn’t selfish at this time wouldn’t have survived.  I can see her point, but I still wanted to see more self-awareness in Laure’s character.  There are women who have to be cold to survive hard times… but at least sometimes they feel some guilt about that.  Plus I don’t think all of Laure’s actions were survival-based, she just genuinely doesn’t seem to care about other people.

In the end, I wanted to like this book more than I did.

Note: I received an Advanced Review Copy of this book from WW Norton & Co.  The author and publisher had no input in the content of this review.