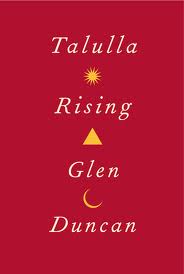 I loved The Last Werewolf, so I did something I don’t normally do – picked up its sequel right away.  Unfortunately, Tallula Rising disappointed, not just a little but a lot.  I took this book with me on vacation, and while it got me through several stressful days of travel headaches, once I got out of the airport I realized I was NOT enjoying this book.

WARNING: while I don’t think there are spoilers in this review, it is a sequel, so I don’t recommend reading this review if you’re thinking about reading the first book.  If you like horror/supernatural stories at all, STOP HERE and pick up The Last Werewolf.

But if you’ve read Werewolf, here’s my take on the sequel.  I gave some thought to why this book felt so different from the first book.  And here, in a nutshell, is what I came up with:

1)     I loved the character of Jake, but really disliked Tallula.  Jake had intellect and elegance.  He had 200-years perspective on life.  He was also a good friend and cared about the people who helped him along.  Yes, he kills people out of necessity but he tries to plan out who he killed and why.  Tallula, on the other hand, revels in the goriness of her werewolf life.  And while The Last Werewolf was about accepting your inner nature and coming to terms with contradictions, Tallula kind of just lives for food and sex.  She’s not much of a friend to her “handler”, and she does horrible things like chaining a girl in her basement for a month while she waits for the full moon so she can eat her.  Jake would never have kept someone captive and terrified like that.  And this was in the first chapter.  I remember thinking, ugh, I don’t like the way this book is starting out, but The Last Werewolf was so good I gave it a shot.

2)     Along the lines of not liking Tallula, I hated the kid storyline.  Tallula obsesses about being a mother but it’s not meaningful, it’s self-centered.  Sort of “poor me, what a bad parent I am” over and over again.  So of course, the reader is supposed to think “but no, you’re worrying so much that you’re really a good parent”.  Bleh.

3)     Violence.  Violence.  Violence.  I said in my review of The Last Werewolf that I really appreciated how Duncan told a gory story but really skirted the lines of acceptable and necessary violence – for me, at least.  This book crossed my violence threshold early and often.  I wish I’d put it down halfway through — before some incidents in the book got stuck in my head (once there they don’t come out).  There’s violence as in “I can’t help eating this helpless person” and then there’s violence as in prolonged torture and degradation.  I’ll spare you the details since I wish I’d been spared.  I’ll just say again, bleh.

Here’s a link to a Tor.com review that’s a little more balanced.  Reviewer Alex Brown says “reading Talulla Rising was an experience riddled with ambivalency.”  I like what this review has to say about a rape scene in the book.  This part of the book was a perfect example of violence that adds something to a story, that isn’t just there for shock value.  Unfortunately I didn’t find much of that in this book.

The first book was thoughtful, explored new ideas and had an unexpected story and point of view – but this sequel just felt like a poor rehash of those ideas.  It’s just the same characters with more action and horror.  I think that’s an easy trap for a sequel to fall into. But I expected more from Glen Duncan.

← The Casual Vacancy — can it live up to the hype?
Review: Attachments by Rainbow Rowell →