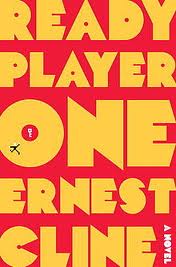 So much has been said about this book, I’ll keep it short.  That said, it was a great read and I highly recommend it to anyone who grew up in the eighties.

Ready Player One is set in the near future, when mankind has pretty much given up on preserving the Earth and now spends most of its time in OASIS, a virtual world.  Wade Watts attends a virtual high school and is fixated, like most people, on one thing: winning a challenge set by the now-dead James Halliday.  Halliday created OASIS and became the richest man alive, and before he died he created a contest: to find three keys hidden deep in OASIS.  The first to complete the puzzle will win his fortune.

Wade is poor, and mostly family-less except for his aunt.  He lives in a trailer and is lucky to have the basic equipment he needs to log into OASIS.  Without resources he can’t possibly travel to the many worlds inside OASIS to look for the keys.  What he can do, though, is learn everything he possibly can about Halliday’s history and favorite things, which all come from Halliday’s childhood during the eighties.  Just as in Charlie and the Chocolate Factory, it’s unrealistic to think that starving little Charlie Bucket is getting a ticket to the factory when every rich parent in the world is paying people to open candy bars.  But if Charlie doesn’t get in, we don’t have a story.

Unlike Halliday, and clearly Ernest Cline, I didn’t like the eighties.  I don’t have warm fuzzy memories of John Hughes movies, Cyndi Lauper, arcade games, etc.  So I thought I wouldn’t enjoy this book, but I did.  Maybe because the eighties pop references are so integrated into a fantastic story.  Maybe because everything in this book was so intricately detailed, I couldn’t help but be impressed.  Reading this book felt like you were part of the puzzle, because everything in it triggers a memory of something you forgot you knew.  Cline doesn’t go for the super-obvious, but for the slightly, more obscure references, like the movie WarGames.

My husband read it first, and he thought all the game references would leave me bored or confused.  It’s true I didn’t get most of the D&D and video game references.  But the cool thing about this book was that somehow Cline makes the story perfectly clear.  And one thing I liked about this book was that even if I wasn’t reliving my childhood, I was at least reading about my husband’s childhood.  And seeing the world through his eyes is always something that makes me happy.

At any rate, if this book was just one long collection of pop culture references, I’d have gotten bored pretty quickly.  But it’s not.  Wade is competing against all the other people trying to win this prize, and he’s also competing against the evil corporation, IOI, which has employed people (the soulless Sixers) who spend their days trying to win this contest so that OASIS can end up under corporate control.  Wade and the other contestants are fighting to keep IOI from ruining their beloved virtual world.

If it sounds a little formula, it is.  It’s predictable, but it also reminded me of all those oh-so-cheesy 80s movies that pitted one smart individual against the evil corporation (think Working Girl or The Secret of My Success or Wall Street).  It’s pop culture clichés piled on top of each other.

But the twist on the solve-the-puzzle, fight-corporate-greed story is this: it’s mostly happening in a virtual world.  So the cool thing about this book is that Cline really thinks about how his story goes in and out of the real world, and what it means if in the future, most of our interactions are through avatars rather than in-person.

This book isn’t Shakespeare, by a long shot.  Cline is either ripping everyone off or he’s completely brilliant.  Either way, it’s a fun and clever read and one I was sorry to put down.

5 comments for “Review: Ready Player One by Ernest Cline”