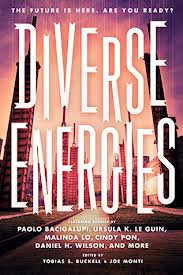 I received a free copy of this book from NetGalley.  It’s a science fiction anthology that includes stories from Paolo Bacigalupi and Ursula LeGuin.  While I don’t read a lot of anthologies, it’s also nice to think you might find some new authors to read.

The theme of this anthology is diversity.  Its editor, Tobias S. Buckell, who is Caribbean and British, says:

Books were my entertainment.  I loved tales of fantasy, strange lands, strange worlds, strange futures, and adventure.  And over time I came to realize that most of the books I read had only one kind of hero, one kind of face on the cover.

I write adventures about the future, and of future worlds, and they’re populated by a diverse set of characters.  Why?  It’s the future face of the world.  It’s us.  All of us.  And we all deserve to be seen in the future, having adventures, setting foot on those strange new worlds.

I wanted to see all the sides of my families in stories about the future, from my pale relatives to my dark-skinned ones.  I want to see the whole human race.

My husband likes his science fiction to be pretty technology-driven, and these stories aren’t.  But if you’re looking for good fiction about strange worlds and cultures, or what racism and classism might look like in the future, you’ll enjoy this.

A quick run-down of some of my favorites.

“The Last Day” by Ellen Oh.  Set in Japan, this story is the closest thing I’ve ever seen to what it might feel like to be around when a nuclear bomb goes off.  I won’t forget this story any time soon.

“Good Girl” by Malinda Lo.  About a dystopian future where mixed-ethnicity people are considered to have terminal illnesses and forced to live underground.  And there’s an outside world that nobody’s seen.

“A Pocket Full of Dharma” by Paolo Bacigalupi.  If you’ve read Pump Six, Bacigalupi’s book of short stories, you’ll be disappointed because this story comes from that book.  Still a fascinating story though and one of the best in this collection.  Bacigalupi’s writing really stands out here.

“Blue Skies” by Cindy Pon.  A story of the futuristic divide between haves and have-nots.  In this story, the “haves” (ten percent of the population) breathe through oxygen tanks and have all kinds of futuristic technology where the “have nots” are lucky if they live till thirty. But the real story here is about a brief human interaction between the two classes.

“Solitude” by Ursula LeGuin.   I’ve had trouble reading LeGuin, having started two of her books and put them both down.  Something about her writing style doesn’t work for me, even though I know her books are classic and adored by many.  This story was different.  It’s about a woman who is a field ethnologist, someone who studies different cultures.  She finds a culture that is extremely difficult to communicate with, and the only way to learn about them is to reside in their village with her two young children.  During the time she stays there, her children become so integrated into the culture it becomes impossible to take them from it.  An absolutely fascinating read.

And a few others I enjoyed:

“Pattern Recognition” by Ken Liu.  This is a story about children growing up in a shelter where they work every day to learn and decipher patterns.

“Next Door” by Rahul Kanakia.  Set in the near future, where the “haves” are immersed in virtual technology and barely see what’s going on around them.  The “have-nots” live by squatting in houses and staying out of the way of the upper class.  This story definitely felt like it could be the future.

“What Arms to Hold Us” by Rajan Khanna.

There were maybe three I didn’t care for, by authors K. Tempest Bradford, Daniel H. Wilson, and Greg van Eekhout.  Why?  Two were a little too action-oriented for my tastes, and one started out really interesting but went on a bit too long for me.

But all things considered, this was an anthology that introduced me to new ideas and authors, and scary visions of the future that could very well exist.  I think for many of these stories, we can draw a line between today’s political decisions to what might happen down the road.  And that’s something we should definitely think about.

← Review: This is How You Lose Her by Junot Diaz
Review of The Longest Way Home by Andrew McCarthy →

Join 1,964 other followers
Follow The Book Stop on WordPress.com