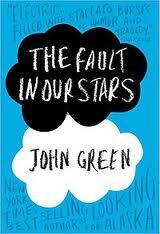 I bought this book for my teenage niece in June – I was looking for something that would go beyond the paranormal, dystopian stuff that’s mostly on the shelves right now.  I like that sort of thing, but with young adult fiction it seems like that’s all there is.  (I’m also glad teens are reading – but not sure most of that stuff is any good.) As the recent list of NPR’s most popular YA fiction showed, John Green is a hot commodity among the YA crowd.  His books definitely go toe to toe with Stephenie Meyers, Suzanne Collins, and JK Rowlings in terms of popularity.  He’s also won a ton of awards, including the Printz Award for Looking for Alaska.

John Green writes about real life, and not just life, but death, too.  He writes in a way that’s different from most authors, although I can’t say why exactly.   I’ve read three of Green’s books, Looking for Alaska, An Abundance of Katherines, and The Fault in Our Stars, and would recommend any of the three. They are real-life, well-written, deal with tough subjects and appeal to both genders (which is rare in YA).

But I’m conscious when I read his books that I’m not a teenager.  With the paranormal/fantasy/dystopian stuff, there’s almost no difference between a book classified as adult and a book classified as YA, but John Green’s books are clearly aimed at the young.  Which is not to say I didn’t enjoy it.  It’s just that maybe I “appreciate” his books more than I can really get caught up in them.

The Fault in Our Stars is, to be very blunt, about kids with cancer.  Hazel is in a support group for teens with lots of varying types of cancer.  Her friend Isaac introduces her to his friend Augustus, which sparks a friendship, and more.  I’d like to say this isn’t a book about cancer, it’s a book about teens with cancer.  As Hazel says at one point, “cancer books suck.”  But cancer is never far from this story, and Green writes about it in a way you might never forget, the next time you’re feeling uncomfortable with the topic.

Green really gets into the heads of his characters, and Hazel feels incredibly real – despite her young age and the fact that she breathes through a machine, has her lungs drained on a regular basis, and expects to die pretty soon.  She and her friends do teenagery things like play video games, listen to music, talk about boys, and argue about characters in their favorite book.  Green builds characters you’ll want to be friends with, and at the same time this is a story that will have you turning pages to see what happens.

There’s a lot of “aha” writing in this book which made glad I read it. Green expresses Hazel’s complicated feelings about her parents, friends, and Augustus in a way that made me understand what Hazel’s life might be like.  I also appreciated that Green never quite gives in to the melodrama that is teens with disfiguring, potentially terminal cancer.  You never feel like this is just a tear-jerker.  Although if you’re a parent, I’m guessing this book is a lot harder to read.

I love to see where authors get their titles from.  Green takes his title from a quote in Shakespeare’s Julius Caesar:

“Never was Shakespeare more wrong than when he had Cassius note, ‘The fault, dear Brutus, is not in our stars but in ourselves.’  Easy enough to say when you’re a Roman nobleman (or Shakespeare!), but there is no shortage of fault to be found amid our stars.”

Thumbs way up to Green, for a book that feels new, young (from my non-teenagery perspective, that is) and not too sappy. If this book was a cry-fest I wouldn’t recommend it – I hate that sort of thing, especially when I’m on the Metro (take that, David Nicholls).

If the subject or the fact that it’s YA doesn’t scare you off, or if you have a teen to buy for, I highly recommend this book.  John Green’s books may be tough but they’re real – and I personally think that teens want to read about the tough stuff, whether it’s world-ending vampire battles or teens battling cancer.

For an interview with John Green on character development, see this post at Misprinted Pages.

← 2012 Best Book Lists — What were your favorites?
Review of The Secret Keeper by Kate Morton →