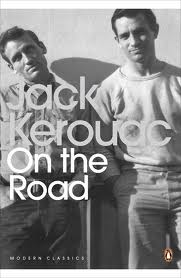 When I put On the Road on my Classics Club list, I knew little or nothing about the Beat Generation, except what I picked up living in San Francisco for a few years.  Still, Kerouac is one of those literary icons I don’t feel complete without reading.  This book came up as my Classic Spin book for March-April, which means it was picked randomly from my list as the next book I read.  Which is good, because I had to force myself to read this book.

I heard from a number of bloggers that this was a disappointing and difficult read, and it was.  Kerouac’s telling of a life of aimless travel, drug use and casual sex may be historically or culturally important, but it’s got no plot direction and few likeable characters.  Kerouac’s message seems to be that rules and responsibilities get in the way of really living – freedom is having no responsibility at all and just doing everything by impulse. At least, until you run out of money.

On the Road is a novel but it’s closer to a memoir.  Its protagonist is Sal Paradise, who is torn between his desire to have a relationship and get a degree, and his admiration for his crazier friend Dean Moriarty (who is described again and again as having something really wrong with him, yet Sal does whatever he says).  It’s really the story of Kerouac’s experiences with Neal Cassady, Allen Ginsberg, and William S. Burroughs.

The book is interesting from a historical perspective, occurring several years after World War II.  You can see how those events would give these young men a sense that they have to live life as fully as they can, regardless of the consequences.  Unfortunately, that kind of life also seems to mean treating your friends horribly, lying to women so you can get them in bed, and mooching money from your family.  I kept wanting Sal to do something real for someone, but he disappointed me over and over again, just as his friends do to him.  He has ideals but he doesn’t stick to anything.

The writing is mostly a drug and alcohol-addled muddle of “we did this” and “then we did this” but occasionally Kerouac would describe something in such a brilliant, poetic way I had to flag it.  And that’s what makes this book worth reading.

And before me was the great raw bulge and bulk of my American continent; somewhere far across, gloomy, crazy New York was throwing up its cloud of dust and brown steam.  There is something brown and holy about the East; and California is white like washlines and empty headed – at least that’s what I thought then.

Maybe the best parts of this book describe Kerouac’s feelings about music.  It’s hard for me to get too into his drug and alcohol binges, but I can admire his passion for jazz.

They writhed and twisted and blew.  Every now and then a clear harmonic cry gave new suggestions of a tune that would someday be the only tune in the world and would raise men’s souls to joy.  They found it, they lost, they wrestled for it, they found it again, they laughed, they moaned – and Dean sweated at the table and told them to go, go, go.

In another scene, Dean is explaining jazz and what IT means:

“Here’s a guy and everybody’s there, right?  Up to him to put down what’s on everybody’s mind.  He starts the first chorus, then lines up his ideas, people, yeah, yeah, but get it, then he rises to his fate and has to blow equal to it.  All of a sudden somewhere in the chorus he gets it – everybody looks up and knows; they listen; he picks it up and carries.  Time stops. He’s filling empty space with the substance of our lives, confessions of his bellybottom strain, remembrance of ideas, rehashes of old blowing.  He has to blow across bridges and come back and do it with such infinite feeling soul-exploratory for the tune of the moment that everybody knows it’s not the tune that counts but IT.”

The other powerful thing about this book is that Kerouac and his characters really do experience America in a way that most of us don’t, from New York to California to Mexico. I wish I could say I’d gotten into a car, driven across America, and just experienced whatever came along.  I wish I could say I’d seen and felt the land in the way Kerouac does, but I know I never will.

In the whole eastern dark wall of the Divide this night there was silence and the whisper of the wind, except in the ravine where we roared; and on the other side of the Divide was the great Western Slpe, and the big plateau that went to Steamboat Springs, and dropped, and led you to the Eastern Colorado desert and the Utah desert; all in darkness now as we fumed and screamed in our mountain nook, mad drunken Americans in the mighty land.  We were on the roof of America and all we could do was yell, I guess – across the night, eastward over the Plains, where somewhere an old man with white hair was probably walking toward us with the Word, and would arrive any minute and make us silent.

I could have put this book down many times, but I really wanted to finish it.  I wanted to see if there’s some lesson in Kerouac’s free-wheeling treks across the country.  It’s interesting to see the push and pull between living impulsively and having responsibilities to family and children.  It’s either freedom or love, with no options in-between.

It’s true that most of us could benefit from living more “in the moment”.  I’m a pretty compulsive planner, so in a lot of ways I found myself admiring that lifestyle.  But ultimately the life Kerouac recounts in On the Road isn’t one I want to experience.

← More for your TBR Pile: Three Award Lists to Check Out
It’s Monday, What are You Reading? →

7 comments for “Review of On the Road by Jack Kerouac”