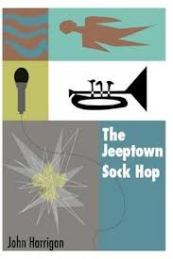 I didn’t grow up in the 50’s, but this book really seems to put you in that time and place.

The town seemed bigger then – and much more prosperous.  The elm trees had not yet died, and the houses had fresher paint.  The jeep factory worked overtime cranking out vehicles for the war in Korea, which meant work for Dad at the Spark Plug Company and other kid’s dads at plants that made glass and brakes and headlights and starter motors and all sorts of things.  The movie house on Dorr Street had lines of people on the weekends.  The noise from the taverns spilled out through their doors that were open on hot summer nights.  The stores were filled with shoppers, the bakeries had huge jelly balls you could buy for a nickel, and the buses gave off trails of smelly exhaust as they lumbered down the streets.

Charlie is a teenager from an Irish family growing up in a 50’s industrial town.  His closest friend is James, a black boy who shares his paper route and lives just a few blocks over in a constantly changing neighborhood.  Charlie has a lot of problems, from his parents’ marital strife, his father’s drinking, and the limp he has from contracting polio as a child.  These issues, particularly the limp, make him a bit more open-minded than most of his friends.

The title of this book suggests this book is about a small-town dance.  It’s a lot more than that, as these families are dealing with economic difficulties in this factory town and the Korean War as well.  Charlie’s father is a World War II vet with a medal who doesn’t want his son (Charlie’s brother) to be forever changed by war the way he was – especially for a war that doesn’t seem to matter.

I think it’s because Charlie’s character feels so likeable and real that makes this more than just a historical or a “coming of age” novel.  He’s open-minded and willing to take a stand for what he believes in, but not saintly or naïve.  He falls for Clarice, James’ sister, but he always knows he’s never going to be allowed to date a black girl.  He tries to bring his friends together, but he isn’t trying to change the world.  He’s just dealing with his own life.

Harrigan can be accused of dealing with too much in this book, but I think what’s nice is that his world isn’t black and white.  His characters deal with (and have) religious, racial, ethnic and gender prejudices, and even those prejudices have layers.  For example, Charlie’s family doesn’t support his feelings for Clarice, and neither does Clarice’s, but no one seems too concerned about Charlie’s friendship with James.  At the same time, Charlie’s mother worries about how black the neighborhood is getting.

A major storyline in this book deals with sexual abuse and the shame and trauma that follows.  I have no expertise in this area, but Harrigan seems to address this subject thoughtfully and realistically.

As you can tell, this book isn’t sugar-coated but it’s not despairing either.  Harrigan keeps these problems from overwhelming by focusing on the things teenagers care about –friends, dating, music, and college.  Most importantly, he builds a friendship between Charlie and Clarice that’s believable.  When Charlie first meets Clarice, he doesn’t even realize it’s possible for a “colored girl” to be beautiful.  When he’s talking to her, he marvels that he’s met a girl he can have a real conversation with (while in the back of his mind he’s thinking about her in a more physical way).

My only complaint about this book is that something about the ending didn’t work for me.  Harrigan tells you from the start that Charlie and Clarice don’t end up together or even stay friends.  But the events that end the book aren’t just startling, but it felt rushed, not adequately led up to or described.  It just happens.

I also didn’t care for the epilogue, which I felt didn’t add to the story at all and detracted from it by taking complex characters and turning them into one-liners.  As with a lot of books, the present-past structure didn’t add to the story.  I think Harrigan could have stayed in the 50’s and this book would have been perfect.

Note: I received a complimentary copy of this novel from the author in exchange for an objective review.

← Red Planet Blues: A His and Hers Review
Review of Let’s Pretend This Never Happened by Jenny Lawson →