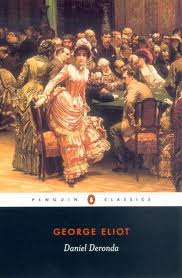 I finally finished it!  Not the best way to start a review, I’m afraid.  I didn’t read this book as well as I would have liked.  By that I mean, I got halfway into this book and realized the only way I was going to get through the long-winded parts was to skim a little (I do mean “a little”).

I’ve wanted to read this book for a while, ever since I read Middlemarch.  Daniel Deronda is one of the few books in Victorian English literature that has Jewish main characters.  I was also interested to get a good sense of public (non-Jewish) opinion towards Jews at the time, not that you can get that from one novel.

One of the real strengths of this book is how much attention Eliot devotes to her two main characters, Daniel Deronda and Gwendolyn Harleth.  This is not a book where much happens, despite its length.  It’s more a story about two really interesting people.  Gwendolyn is a beautiful, strong, and sometimes arrogant young woman.  She wants to be the best at everything; she wants to be admired by all.  And she is, most of the time, even though she’s not particularly talented or smart.  She’s kind of a bright sun that other people revolve around.  She’s not unkind, just self-centered.

Daniel is Gwendolyn’s opposite.  He’s thoughtful and slow to make decisions.  He doesn’t know what to do with his life.  He wants to know about his biological family but he also doesn’t want to know, so he does nothing.  But he’s a good person and while he does nothing for himself, he takes care of all the people around him.

Daniel’s story centers around his rescue of a young Jewish woman, Mirah.  He starts helping her track down her family and this leads him to become interested in Judaism, even though Jews at this time are mostly despised and are not considered part of English society.  One of the questions raised early in this book is whether Deronda himself might be Jewish.

I can only give it a very mixed review, because I found some of it fairly unreadable.  Eliot wrote this book late in her career, and I’m not sure what she was thinking about, but it certainly wasn’t her readers.  This book goes in a strange order, spends lots of time on the characters’ pasts, and at times feels more like a philosophical or political lecture than a novel.

At the same time, I was on edge waiting to see what would happen to Gwendolyn and Daniel.  That’s why I kept with it, even though I didn’t always pay as much attention as I should have.

And I did appreciate the focus on Judaism and the life of Jews in England at the time.  The book takes a very positive perspective (Eliot was very interested in Zionism) while at the same time revealing the many prejudices towards Jews.  In addition to the focus on Judaism, there are some really interesting themes that repeat throughout the book.  One is the idea of how your family (both biological and adoptive) influences your life, and another is this idea of trying to become a better person.  Eliot explores love and jealousy as really complex emotions, not something that just hits you over the head one day.  What I really liked was that none of the issues raised in this book are easy.  For example, at one point Gwendolyn begs Daniel to show her how to become a happier person, and he tells her to become more educated and do more for others.  If you compare Gwendolyn to Jane Austen’s Emma, once Emma decides to become a more thoughtful person, it’s pretty easy for her to get there.  Gwendolyn really struggles to improve her own character, and those struggles make her someone we care about.

It’s not Middlemarch, and I can’t recommend it unless you’re really interested in Judaism in 1860’s England or you’re trying to read all of Eliot’s works.  Still,  there were definitely things about this book that left an impression.

I read this book for the Classics Club and TBR Pile Challenges.

5 comments for “Review of Daniel Deronda by George Eliot”

"The world was hers for the reading."