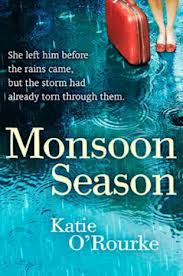 Monsoon Season is O’Rourke’s first novel, and at times it feels that way.  But she’s also done something pretty impressive in this portrayal of a young relationship with some serious problems.  It’s a simple story, but thankfully this book is anything but simple.

Monsoon Season tells the story of Riley and Ben, a couple in their early twenties.  Riley is smart and outgoing.  She’s been living in Tucson, Arizona for about a year after graduating college, and the book begins as she’s taking a bus to her parents’ house in Massachusetts.  She’s running away from Ben because he hit her.

O’Rourke does a fantastic job portraying the ups and downs of this blossoming relationship, from first date to first sex to – sadly – first sign of violence.  She shows domestic violence as a complex issue.  Ben’s own father was an abuser, and Ben struggles to accept the idea that he may be capable of the same kind of abuse.  Riley, on the other hand, struggles with her love for Ben and feels empty without him.  What’s one hit, if he’s sorry and wants to change?  Do you have to throw out all the good parts of a relationship for one bad part?

Of course Riley’s friends, and Riley herself, are adamant that one hit is too many, and that no woman should stay in an abusive relationship.  And really, it’s not just one hit, but a set of events that gradually escalates into violence.

One thing I liked about this book is that it tells a different story than you’re used to hearing.  Usually the story is, sadly, about a woman who stays in an abusive relationship for much too long.  But this is a story about what happens in the beginning of that relationship.

O’Rourke introduces a lot of really complex issues and I like that she doesn’t try to resolve them all.  For example, Riley is much smarter intellectually than Ben, and that clearly presents problems in their relationship.  Riley’s parents have issues, yet they seem to have a strong marriage.  Riley’s brother seems to have been borderline abusive to her when they were children.  All these things contribute to who Riley is, yet none of them are the cause of Ben’s abuse.

I loved the setting of the book, but I have to admit that’s because I spent my college years in Tucson and loved it (the city more than the school).  O’Rourke’s descriptions of Mount Lemmon and other Tucson settings brought back happy memories, including memories of monsoon season itself, which is turbulent and dramatic in a way I haven’t experienced anywhere else.   The East Coast has storms, but nothing like an Arizona storm.  Or maybe I, like Riley, associate monsoon season with turbulent times in my life.

The writing feels very real, very conversational, and O’Rourke has a good eye for the details that make a difference in a story.  She also has a nice way of describing things:

Ben had dark hair and green eyes.  He had certain smiles he only gave to me.  When we ate at my place, he would clear the table and rinse the dishes so it wouldn’t be such a chore for me later.  He wore short sleeves on cool evenings, but always brought his jacket along in case I got cold.  He thumbed through the pages of the books piled on my nightstand.  He readjusted the blankets in the middle of the night, sitting up to make sure my feet were covered.  He told stories like it was the first telling, like I was the only one he’d ever told.

The writing could be more polished in places, but that wasn’t a problem.  There are some weaknesses though.  The biggest one is the frequent switch in narrators.  I’m not sure why O’Rourke chose to have so many characters narrate the book, when it really becomes confusing to the reader and it’s really not necessary to view this story from so many different perspectives.  The first third of the book alternates between Ben and Riley’s perspective, and then there’s an odd shift and everyone else in the book seems to get a chapter.  I would have loved to hear more from Ben’s perspective, and maybe from his and Riley’s mothers.  But having friends and siblings narrate, when they aren’t major characters, was just distracting.

The second is that O’Rourke tells a lot of childhood anecdotes, not only from Riley and Ben’s perspectives, but again, from the many different narrators.  This means you’re jumping around frequently in chronology and these side stories didn’t always seem relevant.  I liked that Riley and Ben’s relationship is clearly influenced by their childhoods and their upbringing.  But I would rather have a few really meaningful anecdotes than lots of them.

And one more thing: there are a few scenes where Riley has to confront Ben, and she comes off as unrealistically strong.  We know from her thoughts, how much she’s struggling with whether to go back to Ben.  And yet her words and actions show none of those doubts. Bravado or inconsistent writing?

This is a long review for a fairly short and quick-to-read novel.  There are issues that could have been explored a lot more, like the idea of whether Ben can actually overcome the violence he picked up from his father, and whether there is something in Riley that was attracted to violent or controlling behavior (which is not to say it’s her fault, but there’s probably something she needs to address in future relationships).  There’s also a lot left unsaid between Riley and her family, and Ben and his family.

If you need a book to clean everything up in the end, this isn’t the book for you — but I like books “messy” and I really enjoyed it.  I like a book that makes me think, and this one did.

Note: I received a complimentary copy of this novel from the author in exchange for an honest review.

← Review of Daniel Deronda by George Eliot
It’s Monday, What are You Reading? →

5 comments for “Review of Monsoon Season by Katie O’Rourke”