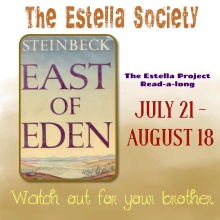 I picked up East of Eden as part of a Read-Along hosted by The Estella Society.  It was also on my Classics Club list, and my reading this year has been pretty light on classics.

I’ve read two other books by Steinbeck: Grapes of Wrath and Of Mice and Men.  From those two books I expected this book to be sad, and dark.  Steinbeck writes about people struggling with poverty, leading difficult lives.  Right?

East of Eden is nothing like what I expected.  Published in 1952, it’s set (mostly) in California around the very early 1900s.  It’s about the American West, agriculture and survival, but also about family relationships.

What I’m loving about the book so far is the feeling that California is really the main character in this story.  Reading this book reminds me of the many things I love about California, and I’m enjoying learning more about its history (there are references to Leland Stanford and “the Farm”, for example, and a discussion of how towns were named by the Spanish and Americans).

There are two families in this book, the Hamiltons and the Trasks.  Most of Books One and Two are about the Trasks.  Cecil Trask, who fights in the Civil War, has two sons, Adam and Charles.  Adam is the sensitive one, while Charles is a brute.  Both have strengths and weaknesses so they are not quite as stereotypical as they sound.  In many ways, Charles is the smarter and more perceptive one, he just has a violent jealous streak.  So far, the book centers mostly around Adam, who goes into the military against his will, wanders aimlessly for a while, then goes back to the home farm to discover that sharing a farm with Charles is not easy.  He fantasizes about going to California.

The Hamiltons are Samuel and Liza – Samuel is an Irish immigrant who feels he has to be jolly all the time even though he doesn’t always feel that way.  Liza is strict and in some ways joyless (“she had a dour Presbyterian mind and a code of morals that pinned down and beat the brains out of nearly anything that was pleasant to do”) but a good mother to their large family.  The girls are smart and go off to school, which is unusual in a farming family.  That’s about as much as we know right now.

And then there’s the other main character of the story: Cathy.  And here’s where this book blew away my expectations.

I expected Steinbeck to write about sensitive, troubled people.  I wasn’t expecting Cathy, who is something out of a Stephen King novel only less sympathetic.  She’s about as scary as anything I’ve read, and maybe it’s because Steinbeck’s prose is THAT GOOD.  He describes Cathy at various points as evil, even demonic.  And yet at one point our narrator considers whether she is truly evil since he never knows any of her motivations – he wonders if her evil is more family lore than reality.

I won’t tell you too much about Cathy, except she winds her way into the lives of these characters, and others – she takes what she can get from them and generally leaves them broken.  I’m wondering who in this story will be her match (Samuel?  Lee?)  It seems odd in a book as nuanced as this one to have a character that’s purely evil.  So we’ll see.

I’m also surprised by how candidly Steinbeck writes about race.  I loved this exchange between Lee, Adam’s Chinese cook, and Samuel:

“I’m wondering whether I can explain,” said Lee.  “Where there is no likeness of experience it’s very difficult.  I understand you were not born in America.”

“And in a few years you can almost disappear; while I, who was born in Grass Valley, went to school and several years to the University of California, have no chance of mixing.”

“If you cut your queue, dressed and talked like other people?”

“No.  I tried it.  To the so-called whites I was still a Chinese, but an untrustworthy one; and at the same time my Chinese friends steered clear of me. I had to give it up.”

There’s so much wonderful writing in the book so far, I’ve highlighted much more than I usually do.  Here are a few quotes:

And mixed with these were splashes of California poppies.  These too are of a burning color – not orange, not gold, but if pure gold were liquid and could raise a cream, that golden cream might be like the color of the poppies.

And this I believe: that the free, exploring mind of the individual human is the most valuable thing in the world.  And this I would fight for: the freedom of the mind to take any direction it wishes, undirected.  And this I must fight against: any idea, religion, or government which limits or destroys the individual.

It was a good time for Adam, the best time.  He was the king of his wide and spacious life.  And summer passed into a hot and fragrant autumn.

I can see why this book was made into a movie and mini-series.  There’s sex, violence, murder, betrayal, love… and I’m not even halfway through yet.

5 comments for “East of Eden by John Steinbeck: Books One and Two”