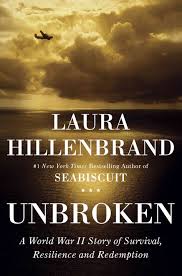 While we’re halfway through the month, I wanted to highlight Nonfiction November, an event hosted by Doing Dewey and a few other bloggers. I haven’t participated much but I’ve already put some new nonfiction titles on my TBR list.

Unbroken is the true story of Louis Zamperini, an Italian-American from California who was an Olympic runner until he enlisted as a pilot in World War II. He survives a long ordeal, first when his plane goes down and he’s stuck on a raft in the Pacific, and second as a prisoner in the Japanese prison camps. This book has been made into a movie by Angelina Jolie, coming out around Christmas in the U.S.

Zamperini’s story is certainly inspiring, and dramatic. I’ll admit, though, that this book dragged for me, and I was relieved when it was over. Some of that’s because of the level of detail in the book, which I could appreciate from a technical perspective. From the amount of information about military aircraft to the many many days Zamperini spent floating in a raft, it just was not as interesting a read as I wanted it to be.

I feel like a terrible person saying that. I know I’m supposed to gush about this book, but honestly, I don’t think it’s the story as much as the writing.

Another problem I had with the book is it never felt objective. Yes, there are a lot of facts in the book, and yes, Hillenbrand must have conducted a lot of research. I’m not questioning that. But it felt like it was mostly based on Zamperini’s perspective. That’s fine when an author uses quotes or letters or other sources, but here I felt like we were just supposed to rely on his views and his memories, which – let’s be honest – can’t be all that accurate so many years after the fact. Plus the book makes a lot of claims about people’s motives and thoughts, like those of the Japanese guards, that didn’t feel substantiated.

And I’ll say something else I know I’m not supposed to: while Zamperini shows amazing courage and strength, and I certainly want to honor his service to the country, I never really got to where I liked him as a person.

Let’s compare this book, just for a moment, to one of my favorites, Into the Wild. Chris McCandless is arguably selfish and immature, turning his back on his family, and setting out on an adventure he isn’t well prepared for. But all that said, after reading the book, he’s someone I really wish I’d known. And maybe the same will be true of Cheryl Strayed in Wild.

I don’t want Hillenbrand to minimize the horrors of floating on a raft without food or shelter, or worse, of being imprisoned and tortured for years, physically and psychologically.

I’m glad I learned more about Japanese prisoner of war camps in World War II. I’m glad I know more about the life of Louis Zamperini. It’s just that the book didn’t grab me.

I found the part about his return among the most interesting aspects of the book. Like reading about prisoners of concentration camps, readjustment to normal life seems almost as agonizing. I think that’s because you desperately want the person’s ordeal to be over, but it isn’t. A person who goes through what Zamperini went through will be scarred their entire life, and the people they care about can’t relate. I did think Hillenbrand wrapped up that aspect of his life rather quickly, but I can understand that wasn’t the focus of the book.

I don’t read a lot of nonfiction, but I have read some nonfiction that I loved. This just wasn’t one of them.

9 comments for “Unbroken by Laura Hillenbrand”