When I’m reading a novel about a historical figure, I want the book to be factual enough that I get a good sense of who the person was. I also want it to have an interesting story. And finally, if I admire the person, I don’t want it to be a story that makes me dislike them.

Esther Freud’s book about Charles Rennie Mackintosh was exactly what I hoped for. It’s an interesting story that really helped me learn about the life of Mackintosh and his wife, Margaret MacDonald. Much of the book was factual – Mackintosh did stay in this small coastal town, he did suffer from financial problems, and he did struggle to earn the respect of his peers and recognition for his work.

For those who don’t know, Mackintosh was an artist and architect around the turn of the 20th century. He designed buildings and rooms in Glasgow, Scotland, and was also known for graphic design (the Scottish rose, seen here) and detailed depictions of flowers and plants.

In 1914, Mackintosh and his wife rent a small cottage in a village on the Suffolk coast.   Mackintosh is estranged from his colleagues in Glasgow and struggling financially, even though he’s highly regarded for his architecture and design. He has a close relationship with his wife, who is als 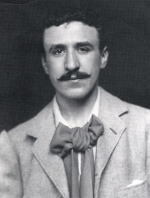 The main character of this book is Thomas Maggs, a fifteen year old who supports his family in a variety of ways but dreams about becoming a sailor. In his free time he draws ships in the harbor, and because of this he draws the attention, and eventually the friendship of Mackintosh and his wife. 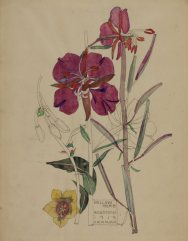 s World War I breaks out, England grows increasingly worried about coastal attacks, and implements a number of restrictions. For example, residents must blacken all windows after dark, to avoid air attacks. Lighthouses are darkened, and drinking in pubs is restricted after dark. The townspeople grow increasingly suspicious of Mackintosh, a foreigner who is somewhat eccentric. Mackintosh collects plants for his paintings and is frequently seen strolling the coast with binoculars. It’s not surprising that the people of the town become suspicious.

I appreciated the fact this Mackintosh is a side character in this book. Freud explains a lot about his art and his career without trying to get in his head and without making up a lot of extraneous details. I have several books at home about Mackintosh that corroborate the story told in this book. In fact, Freud bases much of the story on actual correspondence between Mackintosh and his wife and colleagues.

I also appreciated the many references in this book to real works of art, by both Mackintosh and his wife (whose work is beautiful, as you can see in this picture). I found myself frequently referencing my art books so I could look up the works while reading. 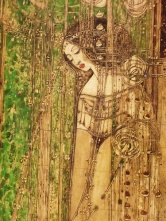 This is one of those quiet, observational books where you don’t mind if not much happens.  I felt like I could really see things like flowers, ships, paintings, even rope-making through the eyes of our narrator.

There are a few things about the end of the novel that didn’t really work for me, but I enjoyed the rest of it so much I was just sorry to put it down.

Like many artists, Mackintosh did not lead a successful, financially secure life. In fact, many of his designs were never built. When I traveled to Scotland in 1998 I was fascinated by his work, and I still am. Thanks to Esther Freud for giving me a novel that really helped me to understand his life and his work better, without adding a lot of fictional drama.

Note: I received a complimentary copy of this novel from NetGalley and publisher Bloomsbury USA.

3 comments for “Mr. Mac and Me by Esther Freud”