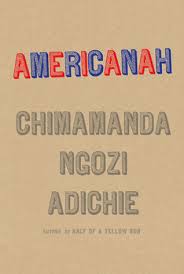 Obinze and Imefelu are two young people growing up in Nigeria. When they get to college and the teachers go on strike, both decide that in order to get a good education, they need to leave the country. Imefelu is accepted at an American school and gets the papers she needs to move to the U.S. Obinze tries to get to England but has more trouble. Both experience a number of challenges overseas, primarily being able to work.

The story is told in flashback, so we know where both of them end up. Obinze is a successful businessman in Nigeria and Imefelu is a Princeton fellow and a successful blogger on issues of race in America. What they experience along the way is the story.

The differences Ifemelu experiences between American blacks and African blacks in America (she uses the terms African-American and American-African) are fascinating although not that surprising. It makes sense, after all, that an African immigrant will have more in common with immigrants from other countries than with African-Americans. They’ve grown up in completely different cultures.

It’s also interesting that racial identity is so completely different in the U.S. compared to Nigeria. Ifemelu says that race issues go away in Nigeria, but they are in the forefront in the U.S.

At some point in the book, one of the characters says, “you can’t write an honest novel about race in this country” because people won’t want to hear it. And yet, this is that novel. Is it a little self-conscious? Yes, but I was happy to read a book that really spoke to me about all the things I should be thinking about but don’t. And all the things I shouldn’t say but do.

As a white woman in the U.S., I admit that when it comes to race, I never know what to say. I’m afraid of saying the wrong thing but I’m sure I do it all the time anyway. I want to be that person who means well, who tries to do and say the right thing, and who’s willing to be corrected. But more often I just avoid the conversation.

There’s a part in the book where Kimberly, a woman who hires Ifemelu as a babysitter, keeps saying that black women are beautiful.

Kimberly said, “Oh, look at this beautiful woman,” and pointed at a plain model in a magazine whose only distinguishing feature was her very dark skin. “Isn’t she just stunning?”

“No, she isn’t.” Ifemelu paused. “You know, you can just say ‘black.’ Not every black person is beautiful.

Kimberly was taken aback, something wordless spread on her face and then she smiled, and Ifemelu would think of it as the moment they became, truly, friends.

It’s a point I won’t forget any time soon. It’s true that I don’t think about race enough. But when I think that it’s scary to be a Jew, or tough to be a woman, or I feel marginalized because I don’t have children, I will remind myself that there are huge differences between the things I worry about and the things a person of color worries about.

In my recent review of The Humans, I complain about a book that tells me what to think, rather than lets me come to my own conclusions. This book does some of that as well. But on this topic, I don’t mind a little telling.

Another cool thing about the book is reading about Ifemelu’s experience as a blogger. Even though it sounds a bit easy that she’s so successful, it makes sense considering that she’s writing about such important issues in a way almost no one else is (compared to, say, us book bloggers).

Finally, I liked that the book talked about black hair and how it’s done, where it’s done, whether to go natural or chemical. Hair may seem like a minor point, but socially, politically, and culturally it’s a very important part of one’s identity. As a curly-head myself (my hair has been described as “ethnic”) I know something about the websites Ifemelu goes to. I know in most stores in DC I can find rows and rows of “ethnic” hair products, but that wasn’t always the case.

Ultimately, this was a book with characters I liked and a story I was happy to keep following.  It’s a romance as well as a story of growth and exploration.

← The Humans by Matt Haig
It’s Monday, What are You Reading? My January Wrap-Up →