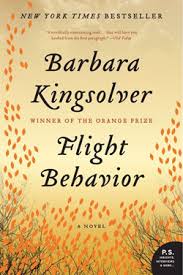 I had heard this wasn’t Kingsolver’s best book, and I’d tried starting it a few times and it didn’t really grab my attention. I went back to it last month and I’m so glad I did.

Yes, Kingsolver can be a bit preachy on the subject of environmental issues. I didn’t make it through her memoir about living off the earth in the Appalachian region. But this book really spoke to me.

Dellarobia is a wife and mother of two living in a very small town in Tennessee. As the book opens, she is hiking up the mountain behind her house to meet a lover. She hasn’t entered into the affair just yet, and she knows it will probably ruin her life, but she’s going anyway. Only, her hike up the mountain is halted by the sight of the entire mountain going up in orange flame. As it turns out, what she sees aren’t real flames, but a vast migration of Monarch butterflies.

She was pressed by the quiet elation of escape and knowing better and seeing straight through to the back of herself, in solitude. She couldn’t remember when she’d had such room for being.

When her husband and father-in-law decide to sell the mountain to a logging company, she has to figure out how to get them up to see what’s happening on the mountain. The discovery of the butterflies has a huge impact on the family, the community, and Dellarobia herself. Dellarobia’s been trapped in marriage and parenthood since she got pregnant as a teenager. Husband Cub is a nice guy who cares for her and their two children, but the two of them have little in common, and Cub is treated like a child by his parents, who run the farm and lease their house.

The discovery of the butterflies brings on a clash between religion and science in this small, very conservative town. The butterflies are seen as a miracle rather than an indication of climate change, which is a bad word in this community. When scientists come in to study the butterflies, they are met with great suspicion.

While this is a book about climate change, what really spoke to me was Kingsolver’s portrayal of the clash of cultures between rural, conservative America and more upper-class liberals. The farmers in this community actually SEE climate change, and it is impacting their ability to work – yet because it’s seen as a liberal issue, they won’t acknowledge it. At the same time, we see that more affluent liberals see themselves as “environmental”, yet they contribute more to the problem of climate change by their consumer habits. For example, flying is one of the worst things you can do for the environment. I fly all the time, yet the people in this community rarely do. And yet I think I’m doing more for the environment because I recycle, buy at farmers markets, and give to environmental causes.

“I’d say the teams get picked, and then the beliefs get handed around,” she said. “Team camo, we get the right to bear arms and John Deere and the canning jars and tough love and taking care of our own. The other side wears I don’t know what, something expensive. They get recycling and population control and lattes and as many second chances as anybody wants.”

Unfortunately the divide between “us” and “them” seems insurmountable. I’ve often wondered why the conservative poor in this country vote so often against their interests (e.g. not supporting universal health care or increased taxation for the wealthy). This book put that in human perspective for me.

It’s a very sad thing that science has been portrayed as the enemy in this country.

The other thing I loved about this book was the character of Dellarobia. She is so strong, and so frustrated with her life. At times I found this book really depressing, because it’s hard to see a way out for her that doesn’t involve losing her children. But she’s someone who needs to do more than she’s doing. She’s living a life with no freedom and nothing that is intellectually challenging, which I’ll admit in some ways is kind of my worst nightmare. This is really a story about her growth as a person. At the beginning of the book she’s ready to throw her life away, but not in a constructive way. You hope, throughout this book, that she’ll either find a way to be content with the life she’s leading, or negotiate a change without hurting her family too much. And like the climate issues, and the political issues, at times this seems an impossible challenge.

This book really made me think, and for that reason I would call it one of Kingsolver’s best.