Brooks writes good, well-researched historical fiction and this book is no exception. If you want drama and romance, her books may not be the ones for you. Brooks focuses on really setting the reader in a specific time and place.

Caleb’s Crossing takes place around the 1660’s, around what is now Martha’s Vineyard. Her heroine, Bethia Mayfield, is a young woman whose family lives on a remote island. Her father is a minister who feels passionately about converting the Native Americans in the area to Christianity. Unlike most of the English, he views them as people who should be treated well and negotiated with fairly. He offers education and medicine to the tribal people in exchange for listening to his sermons.

Bethia is an intelligent girl who yearns for more education than she is allowed, and who picks up languages and learns about religion and philosophy just from listening to her father teach others. She also has a rebellious streak, engaging in a secret friendship with one of the native boys, who she names Caleb.

Much of this book was disturbing, because while conditions are good for the tribal people at this time, they will not stay that way. I was bothered by the drive to convert the natives to Christianity. Bethia’s father (and she herself) honestly feels he is saving them, except he’s also dividing them within their community and taking away their culture and beliefs. At least it’s done civilly, although you can see the threat of violence that underlies all of the relations between the English and the native population.

The language in this book can be challenging, there are a lot of unfamiliar words, as you would expect of a narrative in the 1660’s. I’m geeky about language so I appreciated that. One of the reasons I love historical fiction is to get a sense of dialect in different times (note my recent criticism of Weighing Shadows, which had people in ancient Greece and medieval France speaking just like we do today).

This is not a fast moving book, nor is it a particularly dramatic one. And yet I was always interested in Bethia and wanted to know what she would do next. I found her to be a balanced and sympathetic character; she’s a free thinker but also grounded in reality. She’s more intellectual than many of the women of her time but she also has to fight for every opportunity to learn, and Brooks keeps her from being unrealistic. It’s interesting that this is a book about Caleb, who is a historical figure, and yet it’s much more about Bethia.

There’s a great discussion in the Goodreads reviews about the ending and whether people loved or hated it. I won’t discuss that 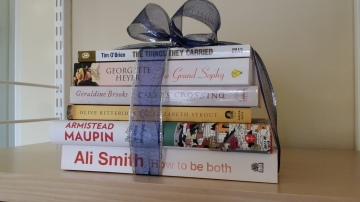 here but just wanted to point it out.

This is the book that completes my TBR Pile Challenge for 2015.

And you can win a FREE very-slightly-used copy of this book! See here for details.

← Top Ten Books Published in 2015
Series on Sunday: The Aeronaut’s Windlass and Zeroes →