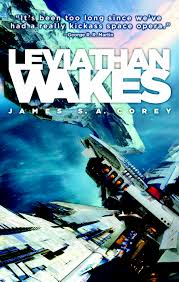 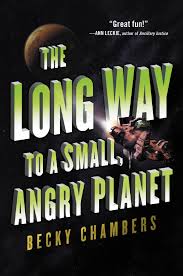 I don’t like science fiction that’s heavy on technology and space battles.  I don’t like space opera – or so I’ve been saying for years.  It turns out I do.

I thought space opera meant space battles.  I think I was confusing “military science fiction” with space opera, and maybe space opera is more about travel and exploration. My husband says space opera should focus on bigger global and political issues.  I say it can clearly do both.

I thought I preferred my science fiction to take place on Earth rather than beyond it.  Books like Oryx and Crake and Station Eleven, for example.  I’m not a big fan of wrecking this planet and then ditching it for something better – although maybe that’s becoming a more likely scenario.

Wikipedia also points out there are plenty of conflicting ideas about what space opera means and how it originated.

So, thinking about some of my favorites, to which I would add Karen Lord’s The Best of All Possible Worlds, and Rachel Bach’s Paradox series, here’s what draws me to these books:

And with that, here’s my take on Leviathan Wakes and A Long Way to a Small, Angry Planet:

Leviathan Wakes: My husband loves these books, but I didn’t think I would, until I started watching the series.  I love the combination of detective noir and science fiction, and I also really like the issues related to class and environmental problems.  I picked up the book before I could get too far into the show , and I’m glad I did.

The Expanse series is actually written by two guys, under the pen name James S.A. Corey. Probably because it’s co-authored, there are two equally interesting main characters instead of one (for an interesting interview about the writing of this series, see here).  Holden is a young and idealistic officer who has to take command when his ship is attacked.  Miller is a cynical detective who lives a rough and not-so-fulfilling life, until he’s asked to find a wealthy young woman who’s run away from her family.  I won’t tell you how these two stories collide, because that’s part of the fun.

The world-building in this book is fascinating.  I liked everything about this book, with one glaring exception: the female characters are not well developed at all.  In fact they are more ideals than multi-dimensional characters. Really there’s only 1.5 female characters to begin with: Julie, the woman who’s missing, and Naomi, Holden’s second-in-command. It’s clearly understandable why Julie is more image than person, but I was disappointed by Naomi, who is simply too smart and understanding. She’s more of a sounding board for Holden’s problems than anything else.

That said, I loved the complexity of Holden and Miller, and the way these two interact and bounce off each other.  I also loved that this book raised really thoughtful, complex issues about philosophy, politics, and morality.  The last part of this book blew me away, and I can’t wait to read the next one.  And the show on SyFy is really good, and even adds to the book in some ways (see i09 for a great discussion of this if you’re interested, but note there are spoilers).

Long Way to a Strange, Angry Planet: I picked up this book because I’d seen great reviews from other bloggers, and because this book is on the Bailey’s Prize Longlist (a literary prize for women authors).  It’s unusual to see genre fiction on the longlist, so I was curious.  I also like to read science fiction by women when I can.

This book was fun and entertaining, and an easy read.  Normally the books nominated for Bailey’s Prize are daunting, to say the least.  I couldn’t finish the last two winners, in fact.  But this book surprised me.  I’m not sure I found it to be terribly literary, or even terribly innovative, but it’s a fun read in the Star Trek vein of exploring new worlds and cultures, and of characters with different social mores trying to relate to each other.  It’s on the lighter side of science fiction, though.  There are difficult issues raised, but Chambers has so many different characters and issues that none are weighted too heavily.  It’s pretty light on plot, but if you’re more interested in the relationships among the different crew-mates than where they’re actually going, this is the book for you.

Chambers’ characters debate such issues as individualism versus collective consciousness (a common SF theme), interspecies and human-AI romance, child-rearing, and how different cultures treat physical affection. The downside of this book for me was that I felt like I’d seen these issues explored before, and nothing here felt new or particularly complex. One of the most interesting conversations for me was a discussion about bearing and raising children; one character is from a reptilian species that bears its children young but gives those children into a “hatch family” of older adults to raise.  Again, these aren’t new issues — is a parent is one who produces the child or one who cares for it?  And is our “family” the one we biologically belong to or a group of our closest friends?

Like Leviathan Wakes, this book set up interesting class and political conflicts between “earthers” “spacers” and Martians, although these conflicts aren’t explored as much.  Long Way focuses more on differences among species, while Leviathan Wakes focuses on the humans.

While I completely enjoyed and would recommend both books, of the two, Leviathan Wakes gave me more to think about, and kept me on the edge of my seat more, too.  I actually found the characters in Long Way too likable; there wasn’t enough conflict.  I’m really hoping the rest of the Corey books have more substantial female roles.  In Chambers’ book, all of the characters are pretty light.  My frustration with Corey is they created really fascinating, flawed male characters, but the women are more like a guy’s fantasy of a woman rather than the real thing.

So that’s my take on Space Opera.

← Letters for Scarlet by Julie C. Gardner
Did You Ever Have a Family by Bill Clegg →