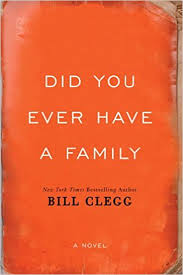 I expected lots of melodrama and tear-jerkery from this story about a woman who loses her entire family overnight in a house fire — the night before a wedding, no less.  But that’s not what I got.  Instead, this is a really rich story about two families (three really, but one is much more peripheral).  It’s a book about characters and their relationships and how one generation influences the next.  It’s also a book about friendship, and even about hope.

The book begins with June Reid driving away from her small Connecticut resort town. She lost her boyfriend, her daughter, her daughter’s fiancé, and her ex-husband when their house went up in flames.  June happened to be outside in the middle of the night, and now all she owns is the clothes she’s wearing and the wallet she happened to have in her pocket.

Lydia is the mother of Luke, June’s much-younger boyfriend.  Lydia and June had become close friends, and now they’ve both lost their children.  Only June won’t talk to anyone, and she has the money to get in her car and go.  Lydia is stuck in this small town, where she’s lived her whole life, and where people look down on her.  Her son Luke was half-black and a convicted felon, and people are sure he must have started the fire.  Now she has no one to turn to in this judgmental small town.

What unfolds is the story of these two families.  Clegg explores the difficult decisions these two parents made, and how those decisions impacted their children.  Neither woman feels like a stereotype and neither is perfect.  Their children, Lolly and Luke, are not fully explored as characters, but this is really June’s and Lydia’s story.  Both June and Lydia are trying to rebuild troubled relationships with their children when this tragedy occurs.  I found their characters really relatable, although at the same time I could relate to Luke and Lolly’s anger at their parents (I particularly identified with Lolly’s reaction to her parents’ divorce).

Clegg really pulled off this big, complicated story.  For one thing, he’s written this book from a mostly female perspective and done it really well.  I loved these characters.  He also created a really multi-dimensional story around a tragedy that could easily just be melodrama.

There are a lot of different narrators, and some people may have trouble with that.  Maybe there are too many narrators, but it does create a really well-drawn story seen from multiple perspectives.  I think what works here is that Clegg keeps the focus on just a few characters.  So while the narrators are telling their own stories, they are really telling the stories of these two women and their children.

The book is set on two coasts, in a small motel on the coast of Oregon and in a small resort town in Connecticut.  Clegg manages to weave in a lot about what it means to be from somewhere, and what it means to be home.  June is an outsider.  She’s well-traveled and sophisticated; she’s the “summer crowd” in this town but she moves there to begin her life over.  That doesn’t go so well.  Lydia is born in this town and can’t seem to leave, even though there’s nothing there for her but judgment. When you have money, you can be so much more mobile.

Clegg gradually reveals all the pieces of this story without it ever feeling unbelievable or overly sentimental. If Clegg had hit us on the head with a “cherish your loved ones while you have them” message, I would not have liked this book. Instead we get a really thoughtful portrayal of how hard it is to make families work, and it’s beautifully written.  I loved it.