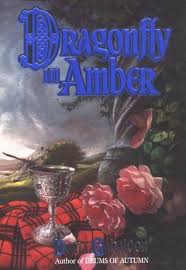 I’ve been binge-reading Book 2 of the Outlander series, Dragonfly in Amber, and also watching the show.  This picture is what my book looks like, which I bought in the mid-90s (!).

I’ve always felt a little conflicted about this book.  On the one hand it’s probably Gabaldon’s best STORY in the series, except maybe Book 1.  The other books move slowly and have a ton of different plot points.  This one’s more focused, has more character development and a great plot. Claire and Jamie have one mission and they’re doing their best to carry it out.

On the other hand, and as much as I personally love France, pre-revolutionary France is not my favorite setting.  The people are horrible and their lives are horrible.  I’d so much rather read about Scotland.  The show is a little more fun because at least you get amazing costumes.

I’m about halfway in and loving the book, especially the relationship development between Claire and Jamie.  I’m reminded all over again how much I love Gabaldon’s writing.  Yes, she can be long-winded and extremely melodramatic at times.  But at the same time she’s so insightful.  I also love the level of detail she brings, whether it’s medicine, battle, clothes, etc.

Claire and Jamie don’t have much time to get to know each other in Book 1, but they do here. You have Jamie struggling to recover from his rape and torture by Jack Randall, and you have Claire struggling to meet the societal expectations of 18th Century France.

As for the show, three episodes in, I will say this: I think they’re doing everything really 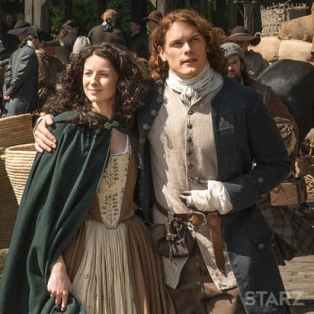 well, but it’s lacking something for me.  That’s the problem with reading a book while you’re also watching it.  I’m noticing every difference.

I think the books just give life to these characters in a way the actors can’t.  I want to love Heughan and Balfe, but I’m going back and forth this season.  Heughan still feels too beautiful for the role (is that terrible to say?), but I do like how uncomfortable he seems with Versailles, spying, etc.  I also find onscreen Claire a bit bossy.  Okay, she’s super-bossy in the books too, but because you get more insight into her thought process, it feels more like “strong-minded” to me.  Onscreen it feels like she’s bullied Jamie into betraying his uncle.  Episode 3 was better, I think because it focuses on Claire’s work at the hospital, and you see Jamie really struggling with what he’s trying to accomplish.

I can’t complain about anything else; the show is remarkably close to the book so far, and they’ve covered a lot of ground in only three episodes.  It’s visually gorgeous.  There are a ton of characters in this season and they can be hard to keep straight, but I feel like episode 2 introduced them well.

Interesting that Jamie is having trouble sexually in the TV version.  In the book, Gabaldon uses sex between Jamie and Claire as almost a healing kind of thing.  (A lot of people have trouble with the way she writes about sex but I’m not one of them.)  But I suppose onscreen, it would look insensitive if they were getting it on after what he just went through.

I was glad the show didn’t begin the way the book does.  If you’ve read the book you know what I mean –I think starting the way the book does reveals way too much about what’s coming.  Starting Episode 1 with Claire returning to the 40s was a good way to go, although I did think her breakdown in the street was a bit much.

Speaking of, what did you think of Tobias Menzies as Frank in episode 1?  I thought it was well done, although it’s hard to see his motivation in staying with Claire the way she treats him.  It feels a bit different in the book but we don’t see his side of things much.  I thought Tobias Menzies did a nice job of going from Randall to Frank.

Thanks for staying with my rambling. For a great review, see The Mary Sue and see this article in The New Yorker comparing Outlander and The Americans (another great show).

More to come on Dragonfly and Outlander!  What are your thoughts?

← The Beautiful Bureaucrat by Helen Phillips
My April Reading Wrap-Up →

4 comments for “Dragonfly in Amber and Outlander, Season Two”