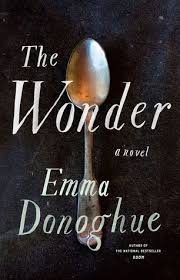 I love how different Emma Donoghue’s books are.  This one takes us to Ireland  just after the Crimean War in the 1850’s.  Lib Wright is a widow who became a nurse and served with Florence Nightingale in Scutari.  She’s been hired by the O’Donnell family to spend two weeks nursing their 11-year-old daughter in a small town outside of Dublin.

When she arrives, she finds out the true nature of her employment.  Young Anna O’Donnell claims she has eaten no food in four months, and the town sees her as a miracle, existing on “the manna of heaven.”  Lib is there as an outsider to observe Anna and to verify that she’s truly not eating anything.  Lib, who doesn’t believe in miracles, is sure the family must be sneaking Anna food in some way.  She’s uncomfortable with the nature of the work, but she’s sure the family’s fraud will be exposed quickly and she’ll be able to go home.

What Lib doesn’t count on is growing attached to her young charge, who seems to genuinely believe that not eating is a gift from God.  Lib gradually gets to know the family and her suspicions shift from one character to the next.

I admired Lib, who is strong and competent in a very uncomfortable situation.  I enjoyed learning more about Florence Nightingale and the nurses she trained (especially after reading about nursing during World War I in The Bishop’s Girl and Testament of Youth).  Lib is a bit arrogant at times, and quick to judge, but she takes her role very seriously and is determined to carry it out.  She doesn’t think much of Ireland, especially the small town, with its religious zealotry and superstition (the townspeople do things like putting out milk in a dish for the fairies).

As the book goes on, we learn more about Lib and Anna.  The power of this book is in the development of the relationship between the two, similar to Donoghue’s incredibly powerful Room.  Lib struggles with her distrust of Anna and her family, and her growing concern about Anna’s health and safety.

This is a story that moves slowly and deliberately.  It’s about two people sitting in a small space together for hours on end, and the intimacy that results (another similarity to Room).  It’s dreary at times, but atmospheric – dark and unsettling.  Donoghue depicts two very different characters, and between these characters there’s a constant push and pull between medicine and faith, education and superstition, strength and frailty.

There’s a mystery here to be solved, and as it unfolded I was completely absorbed.  This is another book by Donoghue that will have you glued to its pages, and also thinking about its characters long after you’ve put it down.

8 comments for “The Wonder by Emma Donoghue”