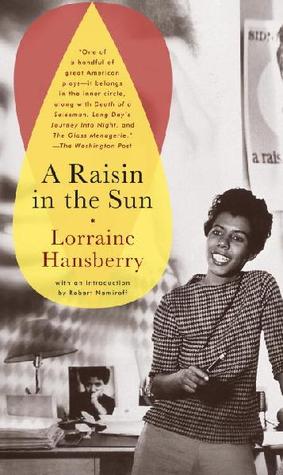 A Raisin in the Sun is a play by Lorraine Hansberry that debuted on Broadway in 1959. The New York Drama Critics’ Circle named it the best play of 1959. I read this powerful work for the Classics Book a Month challenge.

It’s the story of the Younger family, an African-American family living in Chicago.  The characters are Ruth and Walter, and their young son Travis, plus Walter’s mother Lena (or “Mama”) and his younger sister Beneatha.  Walter’s father died recently and Mama is due to receive a life insurance check for $10,000.  Walter wants to use the money to start up a liquor store with his friends.  He already has a job as a limousine driver, but sees that job as demeaning and wants to be his own boss. The family lives together in a small, dilapidated apartment, and they are barely getting by.  Beneatha is a college student and Walter’s small salary is all that’s supporting them.

The title comes from the poem “Harlem” by Langston Hughes:  “What happens to a dream deferred? Does it dry up like a raisin in the sun?” Mama dreams of a home, Beneatha of her future career, and Walter of being a successful businessman.

Racial issues are explored throughout this play, not only through Walter and Ruth’s marriage and relationship with his family, but also through Beneatha’s exploration of her identity, her career goals (she wants to be a doctor), and her choice of boyfriend. George is well off and traditional, and he expects her to be a traditional woman.  Joseph Asagai is Nigerian, and as he teaches Beneatha about his culture, he wants her to see the beauty in her own culture.

As I was reading this book, I couldn’t help thinking about how this family could possibly be happy moving to a white neighborhood, where they would be outcasts in their own neighborhood, and possibly, victims of hate and violence.  It really made me feel for the people who push boundaries, like the children who were the first to attend desegregated schools.  Would I have that kind of courage?

It’s clear that the characters in this play suffer in many ways from the racial discrimination they encounter each day.  Walter feels like he’s not a man because he can’t take care of his family, and his mother controls much of the decision-making.  Ruth is anxious about the possibility of bringing another child into this struggling household.  Beneatha is planning to become a doctor, and has the most positive outlook, but it’s not clear she has any idea of the kinds of barriers she’ll face as an African-American woman trying to become a doctor in the 1950s.  It’s also not clear the family supports her dream; there’s pressure on her to settle down, to marry and support her family.

Hansberry conveys, in a very short space, the enormity of the issues this family faces.  One reason I love to read plays is how dense they are.  In a play, the author has almost no room for description and the whole story must be conveyed through the dialogue of its characters.  And yet Hansberry somehow conveys the life story of this family in all of its complexity, at the same time dealing with very serious civil rights issues of the time.

And the issues raised in this play are hardly dated. Sadly, black families today must still wrestle with discrimination and segregation, even though those things are now illegal. Reading this play, and then reading The Hate U Give right afterwards, I was struck by how very far we need to go to make real progress on racial issues.  Segregation is still prevalent in schools, in neighborhoods, and in workplaces.  Discriminatory voting practices are aimed at keeping blacks from voting.  Black men are incarcerated at much higher rates than white men, even for non-violent offenses, and police violence seems to be a constant threat.  And as seen on a recent Delta flight, many people don’t see black women as doctors.  Hansberry, who died when she was only 34, lived to see the Civil Rights Act of 1964, but I don’t think she’d be too happy with where we are today.

4 comments for “A Raisin in the Sun by Lorraine Hansberry”