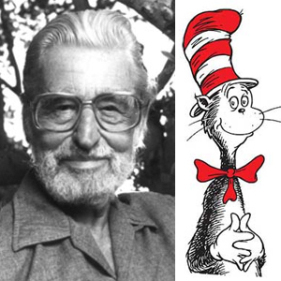 Dr. Seuss has always been a hero of mine.  I’ve been a huge Seuss fan since the day I could read, and probably earlier.  I have a portrait of the man, several biographies, and a lithograph of the Lorax graces my walls. When I was in the hospital at fourteen my family brought me a stuffed Lorax, and that poor, beat up thing followed me through college and law school.

So I was troubled when I heard about the Massachusetts librarian who returned a box of ten Dr. Seuss books, intended for her school’s library, to First Lady Melania Trump.  But my love for Dr. Seuss doesn’t mean I shouldn’t try to understand what lies behind his stories.  I’m white, and sometimes I don’t see these things, or don’t want to.

Trump gifted the ten books to one school in each state.  School librarian Liz Phipps Soeiro in Cambridge sent a letter describing her reasons for the return.  The first was to protest the Trump administration’s education policies.  But the second reason was because Dr. Seuss’ books are not only dated but “steeped in racist propaganda.” “Open up one of his books” she writes “and you’ll see the racist mockery in his art.”

Soeiro cites several works to back up her assertion that Seuss’ works are racist, including literature scholar Philip Nel.  For more on his views, see this excellent interview in the Atlantic:

The books we read as children are some of the most important books that we read, because we read them when we are in the process of figuring out who we are, what we believe, whose stories are important.

There is a fairly common understanding that some earlier works by Seuss (author Theodor Geisel), including To Think That I Saw It On Mulberry Street (1937) and If I Ran The Zoo (1950), do indeed have some racist imagery and text.  Geisel acknowledged and apologized for this later in his life.

Recently, at the Dr. Seuss museum in Springfield, three authors declined to participate in an event, citing an offensive picture of a Chinese man in a mural based on that book.  They argue that, while Seuss’ books can be taken in the context of their time, the museum should have thought about the problematic imagery before they chose to paint the mural in 2017.  The museum has agreed to replace the mural.

In addition, The Cat in the Hat, published in 1957, is seen by some critics as based on blackface minstrelsy (as are Mickey Mouse and Bugs Bunny).  Clearly this is worth talking about, when an author is as revered as Seuss, although I take issue with Soeiro making such a blanket statement about Dr. Seuss’ work.  To do so is to ignore the huge impact he has had on children’s literature and their enjoyment of reading.  To do so is also to deny the many positive themes that resound in Seuss’ books, themes that have taught children for years about tolerance, kindness, and environmentalism.

But I have issues on the White House side as well.  I’m very curious how Trump managed to select an affluent school with a well-stocked library for the book donation.

And I have issues with the specific selection of books sent to each school.  Many are ones I’ve never heard of and none of the books on Trump’s list are ones I would have chosen: “Seuss-isms!”; “Because a Little Bug Went KaChoo”; “What Pet Should I Get?”; “The Cat in the Hat”; “I Can Read With My Eyes Shut!”; “One Fish, Two Fish, Red Fish, Blue Fish”; “The Foot Book”; “Wacky Wednesday”; “Green Eggs and Ham” and “Oh, the Places You’ll Go!”  A number of these weren’t published under Seuss’ name and several weren’t even illustrated by him.  They are mostly early readers, which is fine, but I would have picked some of his storybooks as well.

Was Melania trying to pick Seuss’ less-known books because libraries aren’t likely to have them?  Or was she deliberately trying to avoid the books that run so counter to the Trump philosophy?  Oh, how I would have loved to see a copy of The Lorax sent to these schools instead!  And The Butter Battle Book, and Thidwick The Big Hearted Moose, Yertle the Turtle, and of course, The Sneetches.

I quite agree with Soeiro that sending books that represent diverse authors and viewpoints would have been a better choice.  Children need to see those kinds of books and they are most likely not in school libraries.  I don’t have an opinion about the books on Librarian’s list, except that I think it was snarky to include one at all.  Who sends back a gift because it wasn’t what they would have chosen and then lectures the sender?

Since Soeiro describes Dr. Seuss as outdated, it’s worth thinking a bit about what made Dr. Seuss part of the canon of children’s literature.  His Cat in the Hat was ground-breaking in its time, for its playfulness and also for the shocking immorality of encouraging children to be disobedient.  Seuss wanted children to have fun reading.  By making a picture book exciting and even a little dangerous, Seuss promoted enjoyment of reading among generations of young children.  Picture books and early readers reach children at the age where it’s so important to view reading as fun, not as a chore.

Seuss’ work broke a number of conventions in children’s books.  Parents leave; children disobey; and sometimes the person who parents you isn’t the one you expected.  His books could be scary, like the story with the empty pants.  And often there’s not a happy ending. 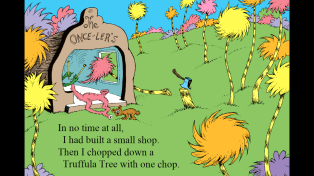 Seuss’ books convey his love of language, and the power of great illustration combined with words.  His use of rhyme, repetition, and “nonsense words” are all important tools in literacy instruction, to help children with phonemes (sounds) and to understand how words fit together as part of a system that conveys meaning.  For early readers, understanding how words work is as important as knowing what a word means.

We can and should appreciate Dr. Seuss for his contribution to children’s literature.  As with many classic writers, we can view him in the context of his time, without throwing out his great works.

But we should also scrutinize his work for any biased messages his books convey.  We should be aware of those messages and talk about them with children.

Seuss may be my hero, but he was also a human being.  I’ll conclude with this statement from Seuss Enterprises and the Springfield Museum, because it says it better than I could:

Theodor Seuss Geisel wrote under the pen name Dr. Seuss during his lifetime from 1904-1991. Dr. Seuss created an enormous body of work including children’s books and political cartoons. Dr. Seuss was a man of his times. He was also a man who evolved with his times. Dr. Seuss’s own story is a story of growth with some early works containing hurtful stereotypes to later works like The Sneetches and Horton Hears a Who! which contain lessons of tolerance and inclusion.

It is in that spirit that Dr. Seuss Enterprises and the Springfield Museums listened to the concerns voiced by the authors and fans and have made the decision to take down the Mulberry street mural at the Amazing World of Dr. Seuss Museum and replace it with a new image that reflects the wonderful characters and messages from Dr. Seuss’s later works. This is what Dr. Seuss would have wanted us to do. Dr. Seuss would have loved to be a part of this dialogue for change. In fact, Ted Geisel himself said, “It’s not how you start that counts. It’s what you are at the finish.”

← My September Reading Wrap-Up
The Good People by Hannah Kent →

13 comments for “Are the books of Dr. Seuss racist?”