Last month my husband and I traveled to Chile, Argentina, and Brazil.  Instead of writing book reviews, which I’m not really feeling at the moment, I thought I’d share our trip instead (this also gives me an opportunity to weed through our many photos).

I’ve wanted to see South America for a long time. The first and main reason is that I want to see different parts of the world and travel outside my comfort zone.  The second is that I volunteer with an adult education program where most of the adults are immigrants coming from Central and South America.  The third is that I want a better understanding of what it means to be American, which is not just the United States.  And the fourth is that South American countries like Argentina and Brazil took in large numbers of Jewish refugees during and after the Holocaust (although to be fair, they also took in Nazi war criminals as well). 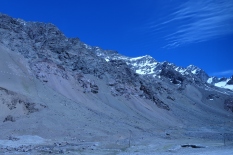 I’d read that unlike most of Europe, English wouldn’t always be commonly spoken in South America, so we signed up for a tour instead of traveling on our own.  This turned out to be a very good idea.  While I found I could passably read most Spanish (meaning enough to understand basic signs, menus, and instructions) I couldn’t understand most spoken Spanish, and my verbal vocabulary was mostly limited to words like “por favor” (please) and “gracias” (thank you).

I’m always struck by how challenging it is to not be able to communicate.  It’s frustrating as hell to meet nice people who genuinely want to converse, and then not be able to say anything much beyond asking where the “bano” is.  And I always think it will get easier, until 10 days into my trip I’m still having trouble asking for a glass of water.

But that’s WHY travel is so important, to help put us in the shoes of those who might be unfamiliar with our country, language and customs, and to help us realize there’s a whole world of differences – and similarities.

Our trip took us to Santiago and Valparaiso in Chile, then to Mendoza and Buenos Aires in Argentina, then to Iguazu Falls, which borders Argentina and Brazil. We stayed in six different towns in two weeks, which was a bit more than I prefer.  I’d rather not have to pack every other day, and I like to really get to see more of a place.  This trip was a bit rushed for us, but then that’s one issue with taking a tour: to get to the places you want to go, you need to follow someone else’s timeline.

Why did we choose this itinerary?  Many South America itineraries spend time in Patagonia, which I’m sure is beautiful but we really wanted a warm-weather trip.  We also wanted to spend more of our time in wine country, and this itinerary involved wine tasting in Chile and Argentina. I found it really interesting to compare Chile’s Carménère to Argentina’s Malbec, and we loved the wineries we visited. 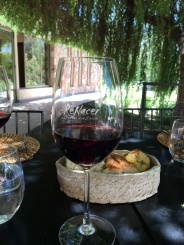 I really enjoyed exploring the parks of Santiago, and learning about the history and culture of the two countries. Other highlights were the Eva Peron memorial and the Latin American Art museum in Buenos Aires, although the food and wine were really the standouts.  I don’t think we had a bad meal on the entire trip, and often the food was so much better than we have at home, even when it was a simple empanada.  Some of the things I expected to be standouts were a bit underwhelming – for example, we saw a tango show and went to the Opera House to see The Nutcracker.  The simpler experiences, like taking a bus across the Andes and making our own empanadas (again, the food) were more memorable.

On the bookish side, we saw Chile’s national library, which included an exhibit about a beloved children’s magazine, and one of my favorite places was Pablo Neruda’s home, La Chascona.  It’s a beautiful house, which he designed personally with an architect friend, so like a Frank Lloyd Wright house, the very shape of the rooms reflects his personality.  I particularly enjoyed seeing his books, his writing notes, and his collection of art, which included a Diego Rivera portrait of his wife. I also learned a lot about Neruda’s history, which was a fascinating one – I hadn’t realized he was exiled from Chile at some point, and that he was a political leader as well as an author.

Our tour guide was great, and it proved to be invaluable to have his guidance along the way, although I left with mixed feelings about the tour experience.  I really liked our fellow travelers, who came from London, Australia, New Zealand and Tasmania — but traveling with a small group left me feeling pressured a lot of the time to say and do the right things.  For example, I was often relieved when we could go off by ourselves but at the same time I felt bad for not staying with the group.  Ultimately, though, I think that pressure comes from myself and not from others, and it’s probably something I need to work on.  If I’m constantly feeling pressure to be liked, and constantly worried about how I’m seen by others, I need to learn to let some of that go and just enjoy myself.

We ended our trip with a visit to Iguazu Falls, which was absolutely beautiful.  We had to fly there and back from Buenos Aires, so it was definitely an effort, but the views were extraordinary.

What did I read along the way?  I read a Chilean novel called In the Distance With You by Carla Guelfenbein, and We Were The Lucky Ones, which took place partly in Brazil.  For someone going on a similar trip I would definitely recommend reading the poetry of Pablo Neruda and The House of the Spirits by Isabel Allende.  I can also recommend a book called Who is Vera Kelly? about Buenos Aires and the Falkland Islands during the Cold War.  Our guidebook also recommended Distant Star by Roberto Bolano, a Chilean author I haven’t read but would like to.

That was our trip, and it only to me a month to write about it.  But on a cold, snowy day in January, I was happy for the warm memories.  Enjoy!

7 comments for “Our Travels in South America”