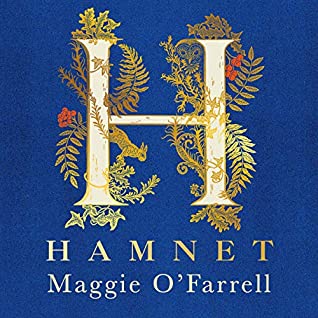 I couldn’t be happier that Maggie O’Farrell’s Hamnet won this year’s Women’s Prize.  I love O’Farrell but I worried that this book couldn’t live up to my expectations, after all the rave reviews.  It absolutely did.

Hamnet is about William Shakespeare, though he’s never actually named in the book. It’s 1596, and 11 year old Hamnet is worrying about his sister Judith, who has fallen ill. Their father (Shakespeare) is in London and mother (Agnes) is out running errands and tending to her beehives at her childhood home.

It always seems like it must be a challenge to write a book that is full of suspense and emotion when the reader already knows what’s going to happen. And in this book O’Farrell is fictionalizing one of the most revered authors ever. And yet this story works on so many levels. It’s about marriage and parenthood, love, and grief. O’Farrell explores the relationship between William and Agnes, their relationships with their children, and the sibling/twin relationship of Hamnet and Judith.  What’s so artful about this book is that no character feels unexplored, from Shakespeare’s parents to William’s sister and Agnes’ brother.  (Only Susannah, the oldest child, is left undeveloped.)

O’Farrell explains that her inspiration for this story is the fact that Shakespeare’s play Hamlet was written soon after his son’s death, and the names Hamnet and Hamlet were considered interchangeable, so there must have been a connection.  One thing I loved about this book is that O’Farrell didn’t try to tie her story too closely to the details of the play, which would have felt artificial.  What she does instead is incredibly moving.

She, like all mothers, constantly casts out her thoughts, like fishing lines, towards her children, reminding herself of where they are, what they are doing, how they fare. From habit, while she sits there near the fireplace, some part of her mind is tabulating them and their whereabouts: Judith, upstairs. Susanna, next door. And Hamnet? Her unconscious mind casts, again and again, puzzled by the lack of bite, by the answer she keeps giving it: he is dead, he is gone. And Hamnet? The mind will ask again. At school, at play, out at the river? And Hamnet? And Hamnet? Where is he? Here, she tries to tell herself. Cold and lifeless, on this board, right in front of you. Look, here, see. And Hamnet?

O’Farrell paints an incredibly rich picture of life in this time and place, so much that I often felt I was there.  I loved the vivid details of the family glove-making business, Agnes’ family farm, and Shakespeare’s life in the theater. There’s a chapter that describes in great detail the transmission of the plague, a chapter that feels particularly meaningful right now.  (Why do so many books seem to be about contagious disease right now?)

It’s also very much a story about the things that drive us; about art and creation. Agnes can no more abandon her love of herbs and nature, than Shakespeare can give up his writing. O’Farrell shows how he’s driven to do what he does, and – of course – how the woman who love him enables his work. I loved O’Farrell’s treatment of his brilliance; this book is an homage to him while not really being about him. Shakespeare is not the main character in this story, but neither is he one-dimensional or larger than life.

O’Farrell is one of my favorite authors, and this is now one of my favorites of her books. I also recommend I Am, I Am, I Am; Instructions for a Heatwave; and The Vanishing Act of Esme Lennox – although this book is completely different. She only has one book I didn’t love, which was This Must Be the Place.

I listened to this on audiobook, and it was absolutely beautiful.  I found myself rewinding quite a bit and listening to parts multiple times, and I cried in a number of places.  The prose is worth it.  I will probably buy the print version just so I can savor it.

← 20 Books of Summer: My Reading Wrap-up
Review: Fleishman is in Trouble by Taffy Brodesser-Akner →

I read nearly every genre and love to talk about what I read. Some of my favorite genres are historical fiction, mysteries, science fiction, fantasy, and children's literature. I try to read diversely and travel the world through my reading. I love books that make me feel I'm in another world -- and also books that help me to better understand this one.

With the Fire on High

The Most Fun We Ever Had

Get a Life, Chloe Brown

Vera Kelly is Not a Mystery

Djinn Patrol on the Purple Line

The Only Plane in the Sky

Clap When You Land

The House in the Cerulean Sea

So You Want to Talk About Race

The Pull of the Stars

The Fire Next Time

The Once and Future Witches

My Tweets
The Lowrey Library

A book blog. Plus a little extra.