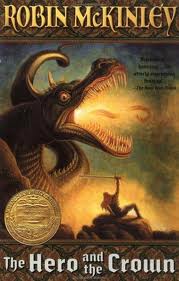 Note: The Book Stop is on vacation!  This post was written in advance.  But please feel free to comment.

If you like well-written fantasy with a strong female character, this is the book for you.  The Hero and the Crown won a Newbery Medal in 1985, which is awarded once a year to the best novel in children’s literature.  This may be a children’s book, but the writing is incredibly adult.  McKinley gives us a fantasy novel that doesn’t rely on the standard tropes and doesn’t take any easy ways out.

Aerin is the daughter of the king of Damar, but she’s never been accepted by the people because her dead mother was rumored to be a witch who enspelled the king into marrying her.  Even worse, royalty in Damar are expected to manifest some magical talents by adolescence and Aerin has failed on that front.  She’s not beautiful, not talented, and mistrusted by her peers.  Her only support comes from her father, her best friend Tor, who is the next in line to be king, and her maid Teka.

Her life becomes more interesting when she rehabilitates Talat, the old and lamed horse who rescued her father in battle but hasn’t been ridden since.  She also creates a new way of riding without stirrups or a bridle.  She and Talat heal each other.  Then, while reading a book about fighting dragons, she discovers an ancient recipe for an ointment that protects skin from dragonfire.

In the world McKinley has created, dragons are small but because of their fire, incredibly dangerous to kill.  They prey on crops and villages, and it usually takes a team of trained warriors to slay one.  And lately, the threat of dragons has been increasing.

This is an incredible fantasy novel, and a surprisingly challenging read.  McKinley writes in a complex, lyrical style, which is at times almost dreamlike.  Most fantasy isn’t “literary” but this one is.

The book mixes the expected (dragon battles) with the unexpected (her visit to Luthe and the Lake of Dreams).  As with most fantasy, Aerin is destined for more than she realizes.  But each battle is hard fought and nothing comes easy to this heroine.

This is the kind of book I would love for my nieces to read, because I know it will make them think, but also because Aerin beats most heroines for bravery and strength.  I think this is a book you could read a few times and get more out of each time.