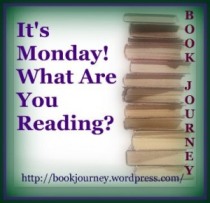 It’s Monday! is a weekly meme hosted by Sheila at Book Journey.

Readers, last week was a tough one, and I’m definitely feeling a little ragged.  On top of a looming research paper and planning our trip to Australia, work is really intense right now and there’s a lot that has to get done before May 9.  On top of that, I picked up a cold from my cubicle-mate at work that knocked me flat for a couple of days and left me in something of a daze of cold drugs.  We leave for California in three days for a wedding and wine tasting, which sounds pretty good, although it takes me away from things that seriously need to get done here.

What am I reading?  I’ve recently finished Kate Atkinson’s Life After Life and Danny Wallace’s Charlotte Street (both courtesy of NetGalley).  And then, because I was sick, I read some fluffy stuff (When Maidens Mourn by C.S. Harris) and a bunch of sample chapters I didn’t need to concentrate on.

Right now I’m reading Cat’s Cradle by Kurt Vonnegut, and I started out really excited about this book, but now I’m struggling with it a little bit.  It could just be my mental state – I feel like I’m not doing right by Vonnegut.  I might need to stick with fluff for a little while.  The other book on my virtual nightstand is Gillespie and I by Jane Harris, but that one isn’t grabbing me either.

9 comments for “It’s Monday, What are You Reading?”