Review: Fleishman is in Trouble by Taffy Brodesser-Akner 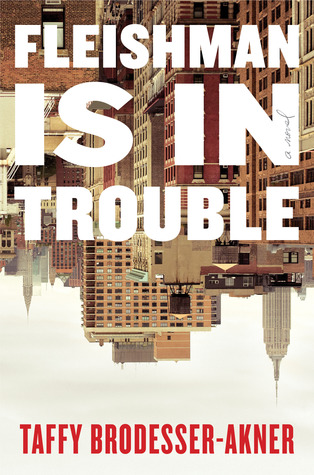 I had mixed feelings about this book, which was on this year’s Women’s Prize longlist. I’m interested in stories about struggling relationships, so the idea of this book that tells the story of a divorcing couple from both perspectives was an interesting one. But while it had some really interesting bits, and some thoughtful insights about women, marriage and money, it didn’t entirely work for me.

For one thing, it was slow to get into. At first I found Toby a pretty interesting character. But I felt the book took too long to get to a critical plot point, wife Rachel’s disappearance. If I hadn’t known from the book description that it was coming, I doubt I would have kept reading. Because until that point it’s just a book about a newly single man exploring his sexuality in the era of Tinder (not what I expect from a Women’s Prize nominee).

Another thing that didn’t work for me was the third party narration by Toby’s friend Libby. An omniscient narrator would have much less distracting. For most of the book, it’s really unclear why she’s there. I felt the references to her as the narrator were awkward and as the story goes on, I really disliked her.

What was so much better than stability and the love of a good person who rooted for you? We fall in love and we decide to marry in this one incredible moment, and what if everything that happens after that is trying to remember that moment? We watch ourselves and our spouses change, and the work is to constantly recall the reasons you did this in the first place.

Fleishman is in Trouble by Taffy Brodesser-Akner

The description for this book made it clear that the author would turn Toby’s story on its head, so as I was reading Toby’s story I was fully prepared for Rachel’s perspective to be wildly different from Toby’s. So when it eventually happened it was completely expected and not terribly illuminating. It reminded me of the writing exercise I did in third grade where you had to write a well-known story from the villain’s perspective (for example, the witch in a fairy tale).

For all of this, I did keep reading, because the writing and the story intrigued me. I wanted to know Rachel’s story, and I wanted to figure out whether I liked Toby or disliked him, a feeling that shifted constantly. I do like a story that doesn’t have a clear villain, and in this one you have three characters (Toby, Rachel, and Libby) who are terrible to their spouses and children but also deal with very real struggles in terms of self-identity, career, and income. There was a lot I could relate to in this book, such as the difficulty balancing time with your family and being successful in a job you care about. Both Rachel and Toby have justifiable reasons for resentment. Toby, a doctor, has to leave work at 5 every day to be the primary caretaker, so he can’t advance as much as he’d like (at one point he’s referred to as “the wife”) while Rachel feels she has to slave away to earn the money that keeps them well off.

Ultimately, the money issues in this story left me annoyed. I get that wealthy parents feel they’re on this hamster wheel of working night and day to provide their kids all the things that the other children in their social circle are getting. But my sympathy wears thin when a character blames all of their seriously bad decisions on the need to have a home in the Hamptons or a nice car. There’s a middle ground there.

In the end, I felt this book had a lot of promise but it didn’t work for me. Maybe that’s because I never had children, or maybe that’s because my own experience with marriage bears no resemblance to the tortured relationships in this book. I wish I’d enjoyed it more, and hope other readers will get more from it than I did.

One Comment on “Review: Fleishman is in Trouble by Taffy Brodesser-Akner”

I read nearly every genre, but some of my favorites are historical fiction, science fiction, fantasy, and children's literature. I try to read diversely and travel the world through my reading. I love books that make me feel I'm in another world -- and books that help me to better understand this one.

Book Recommendations From One Book Lover to Another

For Book Lovers and Random People

We are all in the gutter, but some of us are looking at the stars. Oscar Wilde

A book blog. Plus a little extra.

It's A Reading Thing
Things As They Are