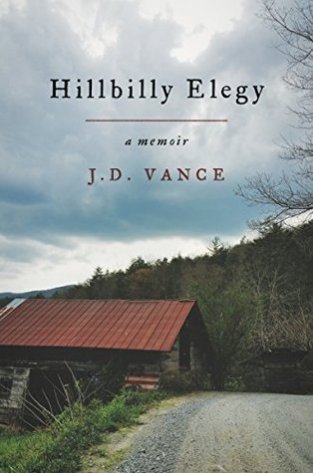 I liked this book a lot more than I expected to, and I find myself referring to it often.  It’s well-written and Vance tells his story in an engaging and meaningful way.  More importantly, he humanizes the people living in the Appalachian area while not idealizing them.  In fact, he argues very clearly that this population is partly to blame for the circumstances they live in.

This book, like Strangers in Their Own Land, is aimed at helping us to better understand a population that has moved far to the right even while voting for politicians and policies that do nothing to help them (and in fact hurt them in terms of jobs, health, and social supports).

Vance really wants the reader to understand him and his family, and in that way hopes we better understand his community.  He comes from Kentucky and spent most of his life in Middletown, Ohio. His childhood is heartbreakingly traumatic, due to his drug-addicted mother and a carousel of temporary stepfathers.  He credits his grandparents for raising him and giving him the ability to succeed, and as you read the book, you understand why.

He portrays his childhood and family problems as very much a part of the region he lives in.  He describes the loss of good factory jobs; his whole town is built around one company, so when it disappears the loss is critical.  He describes how hard it is for people to move away (when you’re unemployed, uneducated and in debt, you don’t have money to move).  And he describes a culture that’s changed from meaningful employment to one that’s sinking in addiction and crime, which leads to violence, creating a cycle of poverty and emotional instability in the next generation.

He also describes the way the far right is taking advantage:

There is a cultural movement in the white working class to blame problems on society or the government, and that movement gains adherents by the day… Instead of encouraging engagement, conservatives increasingly foment the kind of detachment that has sapped the ambition of so many of my peers.  I have watched some friends blossom into successful adults and others fall victim to the worst of Middletown’s temptations — premature parenthood, drugs, incarceration.  What separates the successful from the unsuccessful are the expectations that they had for their own lives.  Yet the message of the right is increasingly: it’s not your fault that you’re a loser; it’s the government’s fault.

Vance opens by saying he’s not even sure why he’s qualified to write this book.  It’s his voice that makes this book so readable and relatable.  In fact, when he writes about going to law school, I found that my own experience as an outsider in a top law school was very similar to his.

Here’s my own story: while education was important to my parents, affordability was key in sending four kids to college, so we all knew we’d be paying our own way by working, getting scholarships, or going to community college.  I went to the University of Arizona, where I was a number in a student population of 40,000.  I took the LSAT and got a high enough score to get into Stanford Law.  As someone who had always found school easy, I never imagined how I’d feel when I got to my dream school.

On the first day of school, we sat in an auditorium while I heard about how many kids in my class came from Yale, Harvard, Duke, Princeton, and Stanford.  Some of my classmates had already founded civil rights organizations, helped the poor alongside Mother Theresa, or medaled in the Olympics.  My classmates fell into every type of ethnic and identity group, except mine: “the State school” kid.  There was nothing special about me.

I wasn’t prepared for the expectations of the classes, while my classmates all showed up with laptops.  Like Vance, I didn’t have the first idea how to buy a suit or when it was needed.  I didn’t know that events put on by the school were really interviews.  I didn’t know how to talk to potential mentors, or how to compete with my classmates.  Your whole legal career depended on how you played the game in the first year of law school.  I didn’t even know there was a game.

This is a terribly privileged thing to complain about, but it’s had a big impact on my life. That first year I wanted nothing more than to give up, but I couldn’t walk away owing the loans I’d taken out, with no degree and no job.  Unlike Vance, who made a point of asking for help, I got mediocre grades and was lucky to end up with a policy job after graduation, when most of my classmates had lined up jobs long ago.  I thought a great job would be a given after law school; I knew it would be hard work, but you also had to know how to get there.

This was 20 years ago and I’ve always told people how much I hated law school.  But reading Vance’s story gave me a new perspective on why I struggled as much as I did – and reminded me why it’s important to understand the background of others before judging them.

More importantly, Vance writes about how childhood instability and trauma has affected his adult life, and he provides research on how such incidents affect other adults as well.  At the same time, he emphasizes that his community has to take responsibility for making positive changes.  Rather than relying on someone like Trump, it’s up to individuals and communities to turn around this horrible cycle of drugs, violence, and unemployment.  And yet, the rest of the country and policy-makers in particular need to understand this cycle of poverty, trauma, and instability, and what can be done to help.

It’s clear Vance benefited from the support of well-meaning people like his grandparents and his law school mentor, but I was extremely impressed with all he’s accomplished, and the powerful message in his book.  If I found myself mirrored in part of it, I expect many other readers will as well.

This book is on my Twenty Books of Summer reading list.

← The Atlas of Forgotten Places by Jenny D. Williams
Do you listen to podcasts? →